Liverpool are navigating new waters with their current run of form, posing a challenge to the team to remain confident and composed during a time of turbulence.

The season to date has posed a different set of challenges for the champions after a nearly flawless two years has already made way for seven league defeats.

Injuries, accumulative fatigue and a knock in confidence have all played their part in recent results and performances.

It has ensured the collective has never been as important for Jurgen Klopp‘s men as they look for a breakthrough to feed their belief heading into each game.

And the trip to Budapest accomplished just that, with the 2-0 win over Leipzig injecting a much-needed boost after snapping a three-game losing streak thanks to a well-rounded performance.

Gini Wijnaldum reflected on the new challenges facing the Reds after the Champions League win and the silver-lining of Liverpool’s recent form.

“It’s really mental, because before when we played good games almost every time we won the games in the previous years,” Wijnaldum told the club’s official website.

“So this is something new for us, the situation we are in right now. 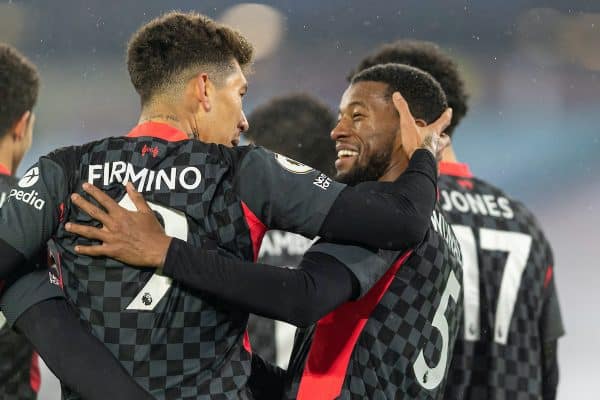 “We just have to deal with it, we have to stay confident and have faith we can turn it around. Games like this help to get the confidence back.

“It’s a difficult situation to be in but also from this situation, we will learn and it will help us along the way.”

It was a sentiment echoed by teammate Sadio Mane, who acknowledged the situation provides fresh motivation for Liverpool to turn their fortunes around and get back to their barnstorming best.

“For us, it’s extra motivation [the recent tough spell]. Like I said, it’s not easy for us, but it doesn’t make us bad, and for sure this is sometimes normal,” Mane said.

“We know what to do now and I think we have to play every single game [with] this kind of performance, otherwise it won’t be easy for us.

“Let’s do our best and try every game to be like our best.”

It’s a level-headed assessment from the pair and one which accepts the switch in mentality that has taken place and the need to return to where they once were.

It will not happen overnight but results like the one against Leipzig feed the belief and bring the Reds one step closer to picking up momentum.