The 25-year-old finally made her first appearance in the green and white, and she has plenty of memories to savour

Toni Payne has admitted she felt right at home after being given her Nigeria debut in Thursday’s 1-0 victory over CSKA Moscow.

The 25-year-old had turned out for the USA at age-grade level from 2012 to 2018 before switching her international allegiance to Nigeria through her parents, who hail from Ibadan, in 2019.

A 90-minute debut appearance and fine display have seen Payne won the hearts of Nigerians, but she does not feel under any pressure, although surprised to be handed a starting debut.

“Honestly, having this opportunity now was a great surprised to me,” Payne told Goal.

“A very exciting and pleasant surprise. I told my family and friends and also teammates and everyone was really happy for me.

“I was also surprised when I was on the starting list. I think players were just coming into camp and had the first match after just training and I think Randy had to make those decisions.

I was really very excited. I used to play as a forward at my club but I was able to go back to my [American] high school days to playing like an attacking midfielder.

“So, I really enjoyed it and glad to be able to connect with the team well. It was my first match and I’m honestly very pleased and very happy with the overall team performance.” 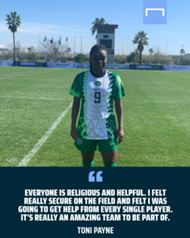 While Chinwendu Ihezuo’s solitary effort was enough to seal Nigeria’s victory over CSKA, the former Ajax Amsterdam striker, who came close to scoring twice, opened up on her debut ambitions.

“Of course, every player will always want to score in their first game,” she continued.

“Honestly, it was one of my main focuses Not because of what I want to do but the overall success of the team.

“I was focusing on playing in different positions, focusing 2on playing simple, defending well for the team and trying to win some passes.

“I wanted to score and that would have really been a nice opportunity on my debut but I know the time will come.”

Following her winning debut with the West African nation, she attributed the CSKA win to the team’s incredible unity despite training together for only a few days.

“With such a short amount of time, we were able to blend with the style we wanted to play and it worked out quite well,” the American-born enthused.

“Randy had a good plan for us. We just had to go out there and do our best which was what we did.

“Honestly, this national team is one of the very few teams that I think are really good at communicating with each other.

“In terms of positivity, giving instructions, and that for me is really important to play as a team.

“Everyone is religious and helpful. I felt really secure on the field and felt I was going to get help from every single player, telling you what to do. It’s really an amazing team to be part of.”

After her fine debut, she will look to inspire the Super Falcons to another victory when they take on Uzbekistan at the Emir Sports Complex on Saturday evening.