Thomas Partey will have a fitness test on Wednesday as he bids to be available for Arsenal’s crucial Europa League clash with Benfica.

The midfielder has not featured since limping off against Aston Villa with a hamstring injury earlier this month and has missed the last three games in all competitions.

But he returned to full training on Monday and could fly out to Athens for the second leg of the last-32 tie, providing he gets the all clear from the medical staff.

While speaking at his pre-match press conference ahead of the game against Benfica, Arteta gave an update on the fitness of the Ghana international.

The Arsenal boss said: “Thomas is very close. He has got a final test today (Wednesday) in training and if he is feeling good, he will be available to play the match.”

As big as Thursday night’s game is for Arsenal, they can’t afford to take any risks with Thomas Partey.

He has come back twice now from the initial thigh injury he sustained in November, but both times he has broken down again and been forced to sit our large chunks of the season.

Since signing last summer Partey has started just 10 games in all competitions, that is simply not enough and Arsenal have missed him badly.

Arteta needs him in his midfield so when he comes back this time, Arsenal have to be sure he is fully fit and there is no danger of him suffering yet another relapse.

What other team news is there?

Rob Holding will not be available for Arsenal on Thursday night.

The centre-back was forced off against Manchester City at the weekend after suffering a head injury late on in the game.

Arsenal used the new concussion substitute rule at the time and now need to follow strict protocols before the defender can return.

“Regarding Rob, he is not available,” said Arteta. “He had a concussion.

“We used that [substitution]. He is completely fine, but obviously now we need to follow the protocols and he won’t be able to travel.”

What’s the expected line-up against Benfica?

Even if Partey is passed fit for Thursday night’s game it’s unlikely that he will start.

Providing there are no other late injury set-backs, then we could see just one change from the team that started the first leg, with Kieran Tierney coming in for Cedric Soares at left-back. 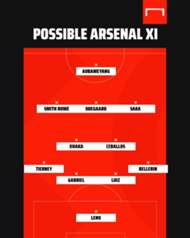