Liverpool’s poor run of form has created uncertainty over their chances of finishing in the top four this season, but the majority of Reds remain optimistic.

From the top of the table at Christmas to sitting 19 points adrift of leaders Man City merely two months later, Liverpool have seen their hopes for the season change dramatically.

The title is no longer on the cards and instead, sights are set on clinching an all-important top-four spot – which Jurgen Klopp‘s side currently sit five points away from.

With 13 games remaining, there is no time to waste and a change in fortunes is required post-haste after accumulating just seven points in the last nine league games.

The top half of the table is heavily congested and there will be little room for further slip-ups, where at least eight wins could be required to get over the line.

The importance of finishing in the top four is not lost on any at Liverpool and while further injury blows threaten to derail the final few months, there is still plenty of hope in the air.

And to gauge the feeling among the fanbase, This Is Anfield took to Facebook and Twitter to see if supporters still expected the Reds to finish in the top four.

On Facebook, 63 percent of the 31,300 fans who voted still expect Klopp’s men to end the season with a Champions League spot through the top-flight.

While not currently anywhere near their relentless best, this side have proven anything is possible and that ensure optimism remains for some. 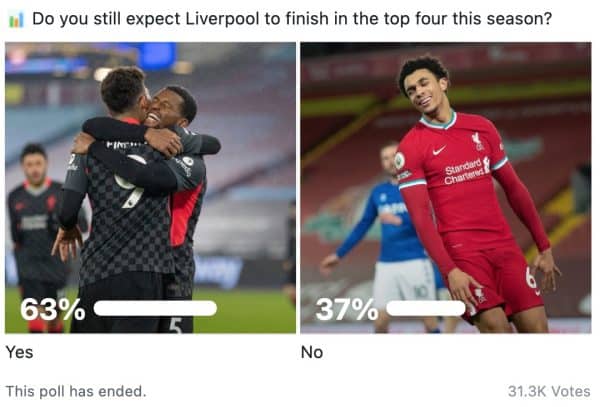 For Padraig Rogers, it is a case of we’ve seen worse achieve the feat, writing:
“We have gotten top four with lesser squads in the past. It’s possible but difficult.”

It’s just a case of when Liverpool will “click” for Dave Wood, and the hope it is sooner rather than later: “I know there will be a point where it’ll click, the question is when.

“This side is unbelievably good, but they’re tired, struggling to find the fire that we’ve had for years and without key personnel in key positions.”

Meanwhile, Rob Hunt assessed the challenge ahead after what has already been a tumultuous six months:

“I think the odds are against us. Not too worried about West Ham, Everton, or Spurs. Leicester look solid and are nine points clear of us…It’s easy to point fingers with hindsight, but it’s been the perfect storm since the pre-season (or lack of).”

On the other side of the coin, Shaun McGarry was honest in saying no to a top spot and that even the other route of winning the Champions League is not realistic, writing:
“Pains me to say but no I don’t think we will finish in the top four.

“The only way we will qualify for champions league next season is if we win it this season which atm I can’t see.”

On Twitter, the results were not as divided but 55.7 percent of the 14,320 fans maintained the same majority, with the Reds finishing in the top four.

It was a case of an ember of hope remaining for @Ged_147, which is flickering in the face of a string of defeats: “It looks less likely with each defeat but there is still hope, we can’t give up.

“Next season starts here, if we can finish strongly it sets us up to start well next season.”

For @hetpet1212, the return of Diogo Jota is just what the doctor ordered and his presence could hold the key: “Honestly think with Jota back will make a massive difference to our attacking qualities.

“Having that fourth man in attack will change our pretty dry tactics and also change our game plan as well. Think he can be the catalyst to turn our season around.”

And there was a look to the bigger picture for @burley_damon both in terms of football as a business and from a well-being point of view, writing: “Financially we need it. But mentally and physically I hope if we don’t finish top four we miss Europe altogether.”

It’s certainly welcome to see hope remains, after all this Liverpool team have given few reasons to doubt them in recent years.

A lot has conspired against them in 2020/21 and it’s by no means an easy task to wrestle back momentum and hit the target, but only time will tell if they can do just that.