Neil Lennon has resigned from his managerial post at Celtic three days after overseeing a damaging defeat at Ross County.

Lennon had been in charge of Celtic for two years during what was his second stint in charge of the Hoops, with the 49-year-old having replaced Brendan Rodgers following his move to Leicester City in February 2019.

He has, however, been under pressure for the majority of the season as Celtic have slipped way behind arch-rivals Rangers in the table, and has now decided to leave his post with eight games of the league season remaining.

Lennon has explained his decision to step down via the club’s official website , with his assistant manager John Kennedy now taking charge of the team on an interim basis.

“We have experienced a difficult season due to so many factors and, of course, it is very frustrating and disappointing that we have not been able to hit the same heights as we did previously,” he said.

“I have worked as hard as ever to try and turn things around, but unfortunately we have not managed to get the kind of run going that we have needed.

“I would like to thank so many people at the club who have given me so much and I would also like to thank my family for their love and support. I wish the Celtic supporters, players, staff and directors nothing but success for the future.” 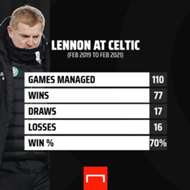 Celtic chief executive Peter Lawwell added on Lennon’s departure: “I would like to pay tribute to Neil for all he has done for the club in his second spell, delivering our eighth and ninth successive league titles, the quadruple treble and winning the last five available domestic trophies.

“While this season has not progressed as we would have liked, it cannot diminish the character or integrity of a man who has given the club so much. He will always be part of the fabric of Celtic and someone who will always be welcomed at Celtic Park.

“On behalf of everyone at the club, and personally, I would like to thank Neil for his work as our manager and I wish him and his family good health and continued success in everything they do.”

After delivering a domestic treble in 2019-20, optimism was high at Celtic Park ahead of their latest campaign as Lennon bid to stave off the threat of Steven Gerrard’s Rangers for another year.

However, Celtic have already dropped 16 more points than they did at the same stage last term, before they were handed the title due to the coronavirus pandemic, and they currently sit 18 behind the Gers, who are now destined to win the Scottish top-flight crown for the first time in a decade.

In addition to a lack of consistency in terms of results, Lennon also came in for heavy criticism for taking his squad to Dubai for a winter training camp amid the continued restrictions in place to contain the spread of Covid-19.

Lennon, Kennedy and 13 squad members were forced to self-isolate upon their return to Glasgow after Christopher Jullien posted a positive test, which then left Celtic with no choice but to field a weakened team at a crucial stage of the campaign.

What legacy does Lennon leave behind?

Lennon’s first stint in the Celtic dugout between 2010 and 2014 saw him guide the club to five trophies, including three successive Scottish Premiership crowns, and he has added another five to his collection since his return.

Indeed, he now has five league titles on his CV, along with four Scottish Cups and one League Cup, and is likely to still be held in high regard by fans once the dust settles on a disastrous 2020-21 campaign.