Liverpool in a rough patch equals Jurgen Klopp‘s departure for some media outlets, but it’s simply nonsense and a drive for clicks during a rare low point.

From “Jurgen Klopp ‘could QUIT Liverpool’” to “Jurgen Klopp to leave Liverpool odds slashed,” it’s been a constant talking point during a time when the Reds are a shadow of their former selves.

The numbers do speak for themselves: two league wins in 2021, zero goals from open play at Anfield in the last five and seven points from the last 27 available.

It’s far from pretty and at another club, it could certainly see the chopping block come into play but not for Klopp and not for Liverpool despite the rumours to the contrary.

And we’ve not been short of those and the boss himself recently shot them down with a proclamation that he was not leaving or in need of a break.

But the latest one to attempt to predict the future path of Klopp comes from German outlet Bild, who have bizarrely assigned percentage likelihoods to four possible options.

The majority share sees a “68 percent probability” that Klopp will leave Liverpool in the summer of 2022, two years before the end of his current deal, to take a break before taking over as Germany’s national manager. 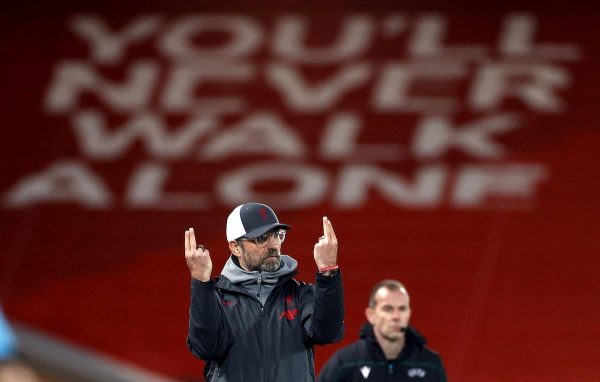 Meanwhile, a ’30 percent’ chance exists for the boss to fulfil his contract at Anfield if “things are right” in regards to shared ambitions.

And there’s only a one percent probability for Klopp to either leave the club or for Liverpool to give him his marching orders, while the effect of the coronavirus is also considered as an exit-clause for this summer.

Simply put, it’s all very un-Klopp like. Not to mention a probability scale to predict any future move is straight-up bizarre.

A shot at the German top spot may certainly be on his radar but Liverpool’s dip in a season comparable to no other, where injuries have come at every turn and fans are locked out will not make for a rash departure.

The Reds have experienced incredible success in the last few years and while present-day is clouded by tumultuous results, Klopp has always been committed to fulfilling his contract until 2024.

“For me personally this is a statement of intent,” he said upon penning his deal back in 2020.

Things can and do change but to assign a “68 percent” probability that he would bid farewell next summer is a stretch, especially when the basis for how the number was created is not clear.

How’s that saying go, 68 percent of all statistics are made up?