The Frenchman scored 16 times and recorded as many 17 assists during his time with Goa since he came to India back in January 2018. He won the Hero of the League award for scoring 11 goals and providing 10 assists in 15 matches in the last campaign.

Moving over to the City Football Group (CFG) owned outfit, Boumous didn’t disappoint as he raced off to four assists in his first five games. He eventually scored two goals and had seven assists in 13 games until his two-match ban was further extended by another two games that ruled out the medio for the remainder of City’s league games. He will also miss the crucial game against ATK Mohun Bagan on Sunday, the result of which will determine whether Mumbai finish the league on top or not.

Earlier in the season, an injury kept Boumous out for a couple of games – when the Mumbai-based outfit dropped points for the first time since their opening day defeat to NorthEast United, in the 1-1 draw against Jamshedpur, besides the 2-0 win over a Hyderabad side who had just two foreigners at their disposal back then. 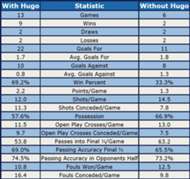 Sergio Lobera’s team have looked more threatening with Boumous in the side. They averaged 2.2 points per game with him, and 1.3 points per game in his absence. In fact, if not for the six goals in the 6-1 win over Odisha on Wednesday, they would have also averaged just a goal per game without him (now 1.8) than with him (1.7).

Despite missing a total of six games this season, the 25-year-old also has the most carries ending with a chance created in the ISL after MD21 this season (14). This should probably explain the dip in the team’s passing accuracy in the final third as well as in the opponents half when Boumous is missing from the line-up.

Hugo Boumous will be available for the play-offs after him being out of action from February 8.

The stats used in this article are provided by Opta and are correct till the game between Odisha and Mumbai City on February 24.