The Toffees hadn’t won at Anfield since 1999 but they heaped more gloom on the injury-ravaged Reds, to the glee of their former striker

The Goodison Park giants had not won at the Reds’ home ground since October 1999. Nonetheless, Richarlison’s early strike and Gylfi Sigurdsson’s late penalty did the damage for Carlo Ancelotti’s side, who are three points behind their neighbours – with two games in hand – courtesy of the 2-0 win.

Everton went into the February 20 clash.on the back of two successive defeats, and the former Nigeria international, who starred for the club for four seasons – following a move from Middlesbrough for a fee of £11.25 million – likened the result to lifting the English top-flight diadem.

Yakubu Ayegbeni tells me that #Everton’s victory at #Liverpool was like winning the Premier League diadem, while insisting that a top-six finish remains the only realistic target for the Carlo Ancelotti’s Toffees 👇 pic.twitter.com/FJruKihfyn

“We’ve been waiting for so long to win at Anfield, it has not been easy,” Ayegbeni told Goal.

“The last time we defeated them was at Goodison Park in 2010 when Mikel Arteta scored; I still remember I played in [that game].

“I got messages from my friends even on Instagram, everyone was buzzing – it was like we won the league.

“It was a great feeling when you play for Everton for so long, once you are Blue, you’re always a Blue. So, I still support, I still check their results.” 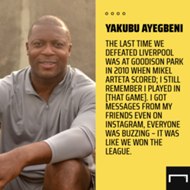 Everton have a realistic opportunity of finishing above the reigning English champions for the first time since 2012-13 campaign, while Champions League qualification is also still up for grabs.

When asked if the result against Liverpool would boost his former team’s aspiration of finishing in the top four, ‘the Yak’ – who is an awe of Ancelotti’s impact on the team – feels a top-six finish at the end of the 2020-21 campaign is a more realistic ambition.

“It’s a great job Carlo Ancelotti is doing in the team,” the 38-year-old continued.

“He bought in some quality players like James [Rodriguez] – who is doing very well. Hopefully, they can finish in the top six and play in Europe next year.

“We have a great manager who understands the players. This season is not going to be easy because with the way it’s going now, everyone is talking about Manchester City.

“As an Evertonian, I still believe the top four is not for us this season but finish in Europe will be a great season.”

Everton welcome Ralph Hasenhuttl’s Southampton side to Goodison Park on Monday evening and victory over the Saints would see them steer four points clear of Jose Mourinho’s Tottenham Hotspur.