Curtis Jones caught the eye most in Liverpool’s 2-0 victory away to Sheffield United, as a much-improved performance saw the Reds return to winning ways.

The Premier League champions took on the bottom-of-the-table Blades at Bramall Lane on Sunday, in what was a must-win game for the visitors after four consecutive league defeats.

Roberto Firmino and Trent Alexander-Arnold both missed chances to open the scoring in a one-sided first half, as Liverpool’s lack of a killer end product again proved to be an Achilles heel.

Jones fired Liverpool in front with a well-taken effort soon after half-time, though, and Kean Bryan’s own goal completed the scoring, boosting the Reds’ top-four hopes.

Here we compare our player ratings with those from the Liverpool Echo, BBC Sport, FotMob and the TIA readers. 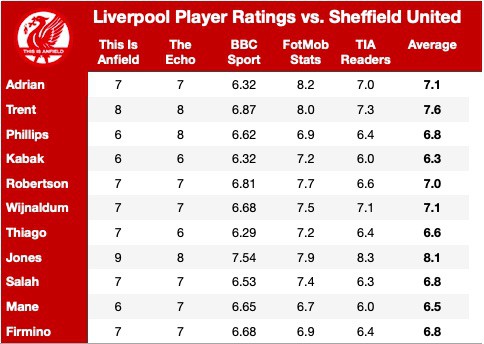 Jones (8.1) was rightly seen as the Reds’ standout player on the night, as he continues to look an increasingly assured player.

The 20-year-old strutted his way through proceedings, not only opening the scoring but also impressing with his quality on the ball.

TIA’s Karl Matchett handed Jones the Man of the Match award, describing him as “exceptional” and claiming “opposition players can’t get near him.”

Ian Doyle of the Echo felt the midfielder always “sought to make things happen” in the attacking third and lauded the “conviction” of his finish.

In second place was Alexander-Arnold (7.6), who has quietly enjoyed a return to somewhere closer to his best form.

According to FotMob, the right-back played three key passes against the Blades, also winning five of his nine duels overall.

Completing the top-three were Adrian (7.1) and Gini Wijnaldum (7.1), both of whom enjoyed solid days at the office.

Matchett hailed “two decent saves and one punch clear” by Adrian, who may have thought his chance had gone after the emergence of Caoimhin Kelleher.

Meanwhile, Doyle thought most of Wijnaldum’s play “went under the radar”, with the Dutchman typically industrious in the middle of the park.

Liverpool have a huge game to prepare for now, with Chelsea making the trip to Anfield for a crucial top-four battle on Thursday night.