Liverpool secured their first win in five Premier League games thanks to a 2-0 victory against Sheffield United on Sunday, helped on their way by a new-look attacking shape.

The alterations from Jurgen Klopp led to one of the Reds’ best performances of the season, in terms of chances created.

Prior to the game much of the focus was on the defensive partnership of Nathaniel Phillips and Ozan Kabak.

Jurgen Klopp was asked about this prior to the game and in his answer revealed that the team had had four training sessions to work on the plan for the Sheffield United game.

Rather than being solely focused on the centre-backs, though, Klopp and his coaching staff have obviously used this time to work on a slightly different formation in attack.

This saw Curtis Jones, Sadio Mane, Roberto Firmino and Trent Alexander-Arnold play key roles, though each player was involved in defining this shape at some point throughout the game and especially during the transition from defence to attack. 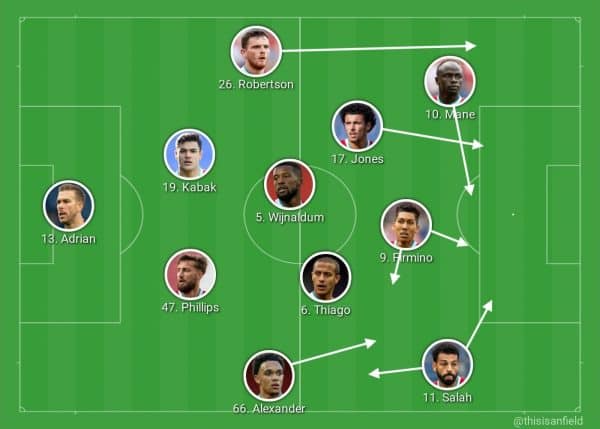 Without the ball Liverpool lined up in their familiar 4-3-3 formation with Firmino leading the line before dropping deep.

A lot of the time Firmino could be seen in midfield while Mohamed Salah and Mane pressed high from wide positions before lurking, ready to counter-attack when the ball was deeper in Liverpool’s half.

This made the defensive formation look similar to the 4-4-2 diamond we have seen in the past, as shown below. 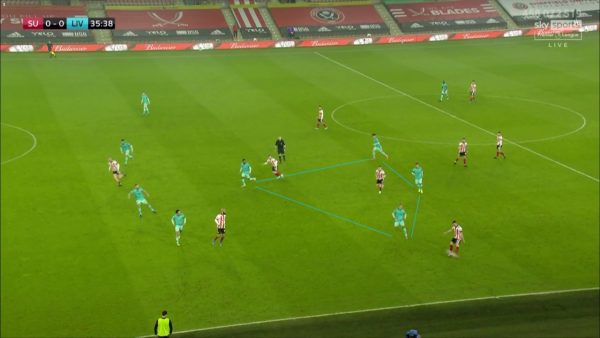 In possession, this changed to a 2-3-5 as Andy Robertson bombed forward down the left, Mane drifted inside, Firmino (mostly on the right) and Jones (mostly left) operated in the half-spaces, and Alexander-Arnold offered support behind Salah and Firmino.

Keeping up with the Jones

Jones was key to this setup as he roamed from his starting position on the left of a midfield three before becoming one of the most advanced players, often ahead of Mane and Firmino.

Klopp commented after the game that the plan was to get Jones in good positions to finish chances.

Curtis Jones (17) furthest forward for Liverpool tonight alongside Salah (11) per the average positions. Mane (10) drifting central in possession, playing more as a No.10. pic.twitter.com/SDdM7QgSia

“We had a lot of talks this week especially, a video session as well where we showed him he has to be more in these decisive areas because he is very good with the ball,” revealed the Liverpool boss.

“His control is good. He controls the game really well and keeps the ball. That’s all really good, but a player of this quality — we needed him in finishing situations, as well tonight. It worked out pretty well so we’re happy about that.”

Jones had one of the best chances of the first half, getting to the back post on the end of Alexander-Arnold’s cross which saw two of these positional tweaks work out perfectly.

The only thing missing on that occasion was the finish, but that came in the second half when Jones was in the right position to get on the end of an Alexander-Arnold cross, this time from the byline via a deflection, and he made no mistake with that chance from near the penalty spot.

While the average positions showed Alexander-Arnold and Robertson just either side of the halfway line, not too far apart in terms of how advanced they were, they were playing fairly different roles.

Robertson’s was mostly that of a winger, using his pace to get into the space vacated once Mane had drifted inside.

Trent would sometimes venture forward down the right and often acted as a fairly orthodox full-back, but there was definitely a tendency to hang back and then join in the midfield when needed, especially early on in the game.

Trent’s positioning saw the formation of a midfield three if the attacking formation is viewed as a 2-3-5, shown below. 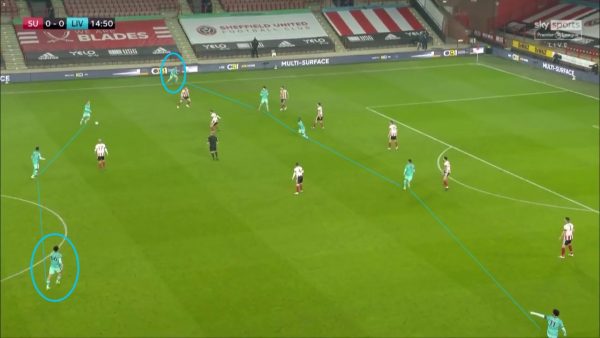 This role seemed to suit Alexander-Arnold and he was Liverpool’s best creator in this game. He made three shot assists, including the first big chance for Jones, and set up the first goal even though that won’t go down as a chance created as it took a deflection.

He was able to use his midfield skills as well as those which have made him one of the best full-backs around in recent years. It also provided a bit more insurance in front of Phillips and Kabak, not too dissimilar to Joao Cancelo’s role at Man City.

Liverpool tried something different against Sheffield United. I thought it worked well. pic.twitter.com/pMGph8d7Uq

The graphic above shows Alexander-Arnold was very much involved in the build-up play while Robertson’s role was more about offering width on the left — stretching the play rather than making it.

The most common pass combinations of the game, according to StatsZone were:

This shows how the play built up down the right, and also how important Salah was in the build-up.

Given Salah’s involvement in deep areas as he dropped to pick the ball up from Alexander-Arnold it could be said that this formation doesn’t get the most from him in terms of goalscoring.

But despite a lot of his work being done near the halfway line, as shown in the touch map below from WhoScored, he was still able to get shots away. 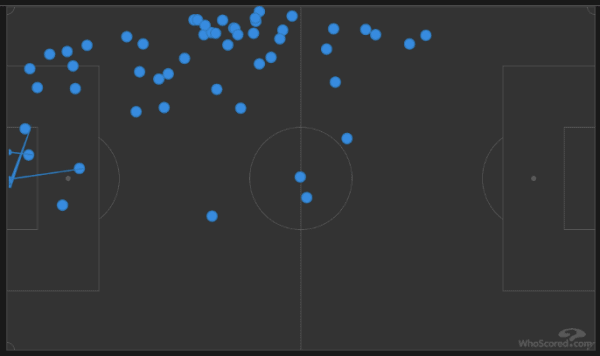 His three shots put him second for xG in the match (0.79 according to Understat), behind Jones (1.07). Two of these shots were considered ‘big chances’ by Opta, and were from inside the six-yard box.

This demonstrates that, on another day, he could still have finished the game with a goal or two despite not being as all-out-attack as usual. 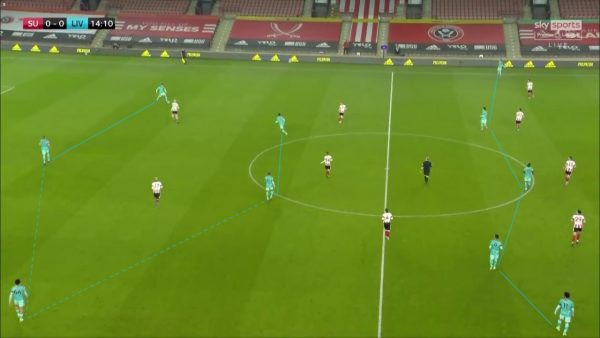 Mane also seemed to be ‘doing a job’ at times rather than getting into the positions most advantageous for himself.

Mane finished the game with no shots on goal, but his target-man role produced the first chance of the game for Firmino. He also played a part in the Brazilian’s ‘goal’ and would have been given the assist had it not gone down as an OG.

Mane also finished the game having received more progressive passes (17 per FBref — passes which advance the ball 10 yards or more) than any other Liverpool player.

This game also saw some of the best play in recent weeks from Firmino, and a lot of it came when he was the player running into space created by others.

It’s an unusual role for the Brazilian who is often the player making space for Salah and Mane to run into — and he did that again here — but Mane’s ability as a target man meant Firmino was often obliged to burst forward himself.