Liverpool have announced the sad passing of club legend Ian St John on Monday evening at the age of 82, with the former striker spending a decade at Anfield.

St John joined the Reds from Motherwell in 1961 and went on to play 425 times, scoring 118 goals which currently puts him 13th in Liverpool’s all-time goalscoring chart.

Liverpool gained promotion to the First Division in his first season under Bill Shankly, with St John going on to win two top-flight titles as well as the club’s first-ever FA Cup in 1965.

It was the Scot who scored the all-important winner against Leeds in that FA Cup final, which stands as one of the most iconic goals in Reds history.

Upon his departure in 1971, St John spent a brief spell with Hellenic in South Africa, before returning to England to join Coventry City and then, after a short time with Tranmere Rovers, retired in 1973.

He went on to manage his boyhood club, Motherwell, and then Portsmouth, with his managerial career making way for a hugely successful role in the media, most famously alongside Jimmy Greaves with Saint and Greavsie. 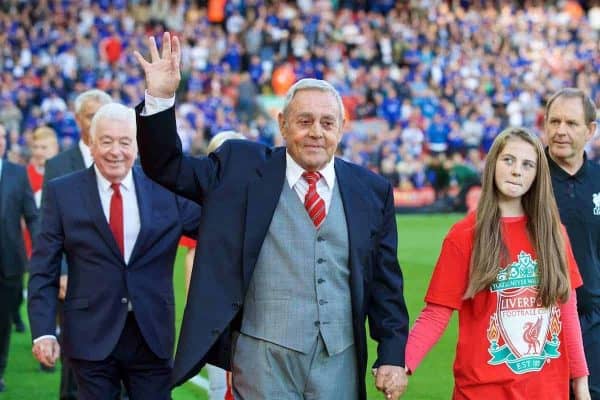 St John remained a regular presence around Liverpool over the years, and is rightly acknowledged as a legend at Anfield.

The club relayed a statement from the St John family on the news, which reads:

“It is with a heavy heart that we have to inform you that after a long illness we have lost a husband, father and grandfather.

“He passed away peacefully with his family at his bedside.

“We would like to thank all the staff at Arrowe Park Hospital for their hard work and dedication during these very difficult times.

“The family would be grateful for privacy at this extremely sad time.”