Pep Guardiola’s pattern of football and depth of quality in the Manchester City squad will see them win the Premier League this season, according to Yakubu Ayegbeni.

Having won their last 14 games in the 2020-21 English elite division, the Citizens pulled 12 points clear of closest challengers Manchester United at the top of the log, even though they were made to work hard for the three points against a well organised West Ham United last time out.

99.9 – Ahead of their clash with Wolves tonight, Manchester City have a 99.9% chance of winning the Premier League title according to the Stats Perform AI team. Wolves are most likely to end the season in 12th. Predictable. pic.twitter.com/phfFLMyGwo

Nonetheless, the former Everton and Leicester City striker says the path appears to have been cleared for the Etihad Stadium giants to ease their way over the line ahead of other rivals – for a seventh English top-flight diadem in their history.

“I don’t think anyone can challenge them. I think [they are 12 points already ahead of Manchester United] and against Liverpool about 16 points – it’s a long way to go,” Ayegbeni told Goal.

“The title is gone already, and Manchester City will win the league. They are going to win for sure.” 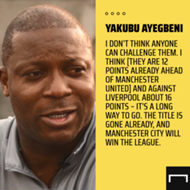 Manchester City’s last league success came in the 2018-19 season and they have shelled out £160m this term to boost their chances of emerging as English champions.

Little wonder Guardiola has been able to consistently rotate his starting line-up to keep everyone fit, with a plethora of top talent to choose from in all areas of the pitch. This, ‘the Yak’ feels makes the team so well rounded.

“They’ve got quality players,” he added. “[John] Stones is playing really well, Rodri as well. They have got some quality defenders and they don’t make mistakes like they use to do.

“When you have quality players, for sure, you will always try to win the league.

“They have a great manager – [Pep] Guardiola – his style of football is unbelievable and that is evident in the way his team plays. The boys understand themselves and when you see them play, you just love football.

“You also have to give credit to the owner for backing the manager up to spend money to buy better players. At the moment, they’ve got those players and they should also see if they can win the Champions League.”

They continue their march towards the Premier League title when they host Nuno Espirito Santo’s Wolverhampton Wanderers on Tuesday night.

Wolves are unbeaten in their last three games with their last result a 1-1 draw at Newcastle United.