When the City Football Group (CFG) made their foray into India, bringing Indian Super League (ISL) side Mumbai City FC under their umbrella, a lot was naturally expected of them.

The entire Indian football ecosystem watched keenly to see how an entity that has a presence all over the world will adapt to the unique challenges that India had to offer. Eight months down the line, they’ve been left pleasantly surprised, as Mumbai City FC stormed their way to the ISL League Winners Shield, securing a spot in next year’s AFC Champions League.

In the context of things, this was probably a more prestigious trophy to win than the ISL itself which only guarantees a spot in the AFC Cup – the continent’s second-tier competition.

And that terrific achievement is down to the shrewd approach taken by the Mumbai City management under the guidance of CFG India CEO Damian Willoughby, who is leading the CFG team consulting the Club pending final regulatory approval for the purchase. The Englishman and his team have brought in their global expertise but made sure they had good knowledge of the Indian football scenario with inputs from the existing Mumbai City team. But bringing it all together in the middle of a pandemic was a tough challenge.

In a season defined by bio-bubbles, quarantines and no travel, Willoughby and his team’s groundwork before CFG’s entry into India was the key differential.

“It has clearly been a really unique and challenging environment for the entire league and all the clubs operating for such a long duration in a bio-secure bubble. It brings lots of different challenges, but we have been hugely fortunate to be able to operate safely and securely for over 160 days now in the fantastic surroundings here in Goa. We haddone a lot of preparations prior to our entry into the Indian football landscape and obviously spent a significant amount of time with the people who were already at the club,” Willoughby told Goal.

Those interactions with the people already at the club, including Mumbai City’s Chief Operating Officer Kandarp Chandra and Director of Football Watson Fernandes who havebeen with the club ever since its inception, were key. Having realised that Watson and team had a good knowledge of the Indian football ecosystem, Willoughby’s challenge was to bring them together with CFG’s global expertise and translate it into building a squad capable of challenging for silverware.

And that was a challenge he aced.

“We knew we were inheriting some really talented people like Kandarp and Watson who have been in the club for many years and that gave us a really strong foundation from which to develop our own CFG knowledge and understanding of the league, the technical standard and the dynamics of this competition. So we started from a really solid base in terms of the people we already had at the club and then when you layer over that this reservoir of knowledge and experience from global football that is a really powerful concoction. That is the unique benefit of City Football Group in my view.

However, the job at hand was not simple, even with the right people on board. Mumbai City were coming off a disappointing season and changes had to be made. Former FC Goa manager Sergio Lobera was available and Willoughby did not think twice before zooming in on him. 17 new players were brought in, including players familiar with Lobera, backing the manager to the hilt.

“We were very fortunate that we were able to hire and recruit and bring in to the club Sergio (Lobera). He again has vast knowledge of Indian football and the player talent pool here so I think when you combine all those elements together, it gave a very good platform and basis to build. We had to invest a huge amount of time fundamentally in building the squad to be in a position to compete and clearly, there was a significant turnover on the football side

“We had to bring in 17 new players and a new coaching staff. That required a significant amount of time and energy from lots of people. There was a collective and collaborative effort to ensure that a competitive squad was built and clearly, we have a squad that is experienced, very familiar, and proven in the Indian Super League and we infused that with some top quality international players and also this season we saw the development and evolution of our Indian players, something we are really proud of.

“It required a herculean effort from a lot of people and what we have achieved in terms of stage one in winning the ISL Shield and qualify for the AFC Champions League. It wouldn’t have been possible without the level of hard work, knowledge and expertise. The next challenge ahead of us to compete in the playoffs and win the ISL trophy now,” Willoughby went on to credit his entire team.

The perfect marriage with Lobera

Now, the appointment of Lobera made sense in many ways, since the Spaniard’s all-out, attacking style of football was not only a proven success in the ISL but also fist in with the type of football CFG wanted to identify itself with (Manchester City and Pep Guardiola anyone?). It was a perfect marriage in many ways. And credit must go to Willoughby and his team for providing Lobera with all the tools to do his job.

“We constructed a squad capable of competing at the upper echelons of the league. Again our recruitment of Sergio (Lobera) was a perfect alignment in many ways. Because at his core, he is so succinctly aligned with the vision and the philosophy we have at the Group. Playing beautiful football, wanting to play an open, attractive and expansive brand of football that is entertaining to the people. But also he is a proven winner and we were excited about the opportunity to be really competitive from the outset and we have done that.

“We have consistently stayed true to our philosophy that he has as a coach and CFG has as an organisation. I think we are really proud not only because we won the Shield but in the style in which we did it was so pleasing. People across our group have enjoyed us playing our signature brand of football,” he explained.

The best possible environment for football

However, translating this into action while a pandemic raged across the world required terrific co-ordination and effort between Willoughby and his team. Willoughby was stuck in Singapore but was constantly in touch with those in Mumbai and the global team which was in Manchester to ensure the squad was in perfect condition ahead of the ISL. And at a time when there was no scope for meaningful pre-season, the efforts of the management to ensure the team was in good shape were commendable.

“We tried to give the football operation the best possible environment we possibly could. We relied on the expertise and guidance of our colleagues in global football. With Brian Marwood (MD at CFG, Global Football) and Matthew Rea (Head of Football Services Delivery, CFG), we were able to create close-season plans and made sure the players came into pre-season in the best possible condition. We made sure that the environment here in our camp in the hotel is as comfortable as possible. The players had all the necessary equipment to remain sharp and fit through the quarantine period and then coming into pre-season raring to go. 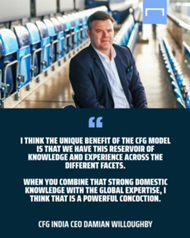 “We looked at the training facility which was provided by the league and wanted that to be the best possible setup that it could be in terms of proximity to our hotel. The surface and quality had to be as per our coaching staff’s requirements and we always had the support of our colleagues. The goal and objective for us were to give Sergio all the support he needed in making sure the players had everything to prepare and perform. Their stay in Goa was comfortable and ultimately focus on one thing in terms of improving every day on the training pitch and performing in games.

“It is a huge testament to the character of the squad and staff that they were able to do that. We are a close-knit group on the pitch and we also live as a family off the pitch.”

Willoughby went on to credit the character within the team be it the players, coaching staff and the backroom staff. In a challenging season, Mumbai City have become the first team under the CFG umbrella to win the league in the first season under their leadership. And that is down to the character and expertise shown by the management, right from Willoughby to the very bottom.

“The whole world is experiencing major challenges over the last 12 months created by COVID and football is a reflection of life and society. So we had to deal with challenges created by COVID in addition to the sporting challenges and hurdles you need to overcome if you want to be successful. But again, I think it goes back to the character of the group. The coach and the attitude and atmosphere we tried to create in the camp which is obviously driven by Sergio and his staff has been first class,” he said.

While the Englishman rightly credits his team for what has been a successful season already (with perhaps more in store in the near future), Willoughby himself has been a huge factor in why Mumbai City FC have done what they were expected to do. And it was no easy task to accomplish.