Jurgen Klopp has “rubbished” suggestions that new midfield cog Thiago Alcantara has been the reason for Liverpool’s slump in form this season.

Klopp has been vocal in his defence of Thiago previously and he once again canned talk that the new arrival has upset the champions’ rhythm.

Thiago arrived at Anfield in September from Bayern Munich to much fanfare. However his time at Anfield has not gone smoothly.

Liverpool are well off the pace in the Premier League, losing nine times already, and seven of those defeats came with Thiago starting.

However, the midfielder was an impressive performer in the 2-0 Champions League round of 16 second leg win over RB Leipzig in Budapest on Wednesday night.

The win allowed Liverpool to progress 4-0 on aggregate and Thiago starred in midfield with Fabinho back in his preferred No. 6 role.

And when asked by a German reporter about Thiago, Klopp said: “Thiago was good, they were all good.

“When Naby (Keita) came on that was also good and it was helpful.

“I assume when you all look at Liverpool from Germany, people say it’s (the problems) to do with Thiago or whatever – that’s rubbish.

“For the players who were new, they always needed time to get used to our game plan but Thiago doesn’t have that.

“But he improves week on week. It is not a short-term project, it is a long-term project and it was good.

“It is very fluid how we work together, the boys played some nice passes and Thiago had a great chance as well, I think he could have had a shot on goal but instead passed.” 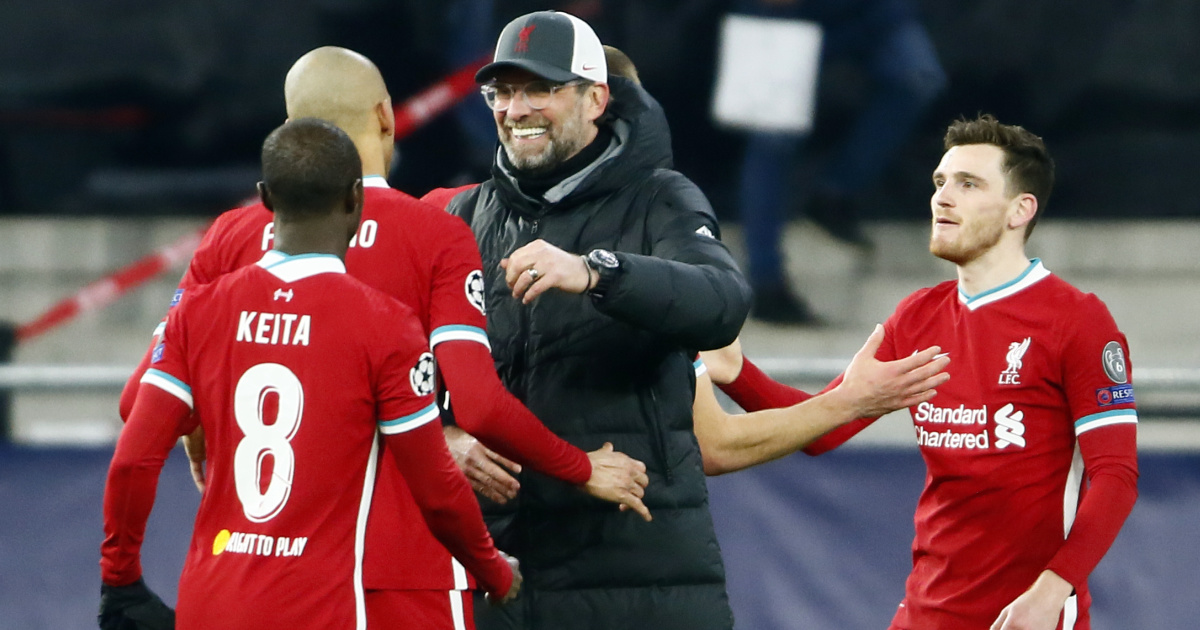 Key to the relative ease of victory in Budapest was the restoration of Fabinho to central midfield. It was the first time since he was forced to permanently deputise at centre-back when Virgil Van Dijk’s season was ended by a knee injury.

But central defender Nat Phillips, on his European debut having been omitted from the squad for the group phase, was also outstanding at the back.

“It was my hope for the season and during the season (to play the Brazilian in midfield) but it didn’t happen so we have to see what solutions we can find the next few games,” Klopp added.

“Of course, number six is his best position, he is one of the best in the world in that position that is clear: not only defending-wise but creating as well.”

On the 23-year-old Phillips, who looked to be heading out of the club in September, the Reds boss added: “Oh my God. What a boy he is, what player he is, what a night it is for him. That’s absolutely great.

“The concentration level he shows now week in week out since he is playing for us is absolutely incredible.

“He is doing exactly the right things at the right moment. In the air he is a monster and you could see today football-wise he is not bad. I couldn’t be happier for somebody more than I am for Nat at this moment.

Nagelsmann: We deserved to lose

“Not a lot of people get the honour to play a Champions League game and he has that now and he played a really good one and he won it and qualified for the last eight. That is really special.”

There was no expected spirited comeback from the Bundesliga’s second-placed side and coach Julian Nagelsmann accepted their performance did not warrant progress.

“I think we deserved to be knocked out. I think the emotional qualities we’ve had in recent matches in the league and cup weren’t shown today,” he said.

“We don’t like losing but sometimes you have to admit the opponent was better.

“We are angry and sad but we’ll focus on Frankfurt who we play in the Bundesliga. It is well-deserved Liverpool go into the next round.”