Chelsea head coach Thomas Tuchel has explained why he told Timo Werner off in German during Chelsea’s 2-0 win over Everton on Monday.

During the first half, Tuchel was caught on the broadcast shouting: “Timo, Timo, for how long are you still going to play on the left? You must play on the right! You have been playing on the left for a quarter of an hour now. Don’t you understand it?”

Tuchel would again shout at Werner in the second half regarding positioning around the overlapping wing-back Reece James. Ahead of a trip to face Marcelo Bielsa’s Leeds on Saturday, Tuchel emphasised that he did not mean to be harsh on Werner.

What Tuchel said about shouting at Werner

“It was very direct, and at the moment without spectators, things like this can get out there,” Tuchel told reporters at Cobham Training Centre. “I was aware [of the video] because people around me showed me.

“We reminded Timo to rejoin his position on the right because he was on the left too long. Switching positions is not a problem but we wanted Callum [Hudson-Odoi] on the left and Timo on the right side to make things easier for him. We reminded him but it was not an insult or aggressive. It was direct.

“I know what you mean but in the end, if it is respectful and not insulting each other [it is fine]. I have no problem with the players being direct to me and sometimes on the sideline, the coaches are in a game mode where things are direct and meant to be clear.

“Sometimes things are not pronounced in the most friendly or nice way. I agree but me and the players are in a game mode. I have the feeling that no one takes it too personally. It is about passing information. This is it.” 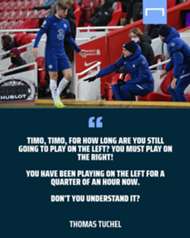 Is this an isolated incident or typical of Tuchel?

Tuchel has a reputation for being ruthless and intense as a coach from his time working at PSG, Dortmund and Mainz.

Since joining Chelsea, Tuchel has already made first-half substitutions and has also taken Hudson-Odoi off just 31 minutes after bringing him on from the bench.

Indeed, the Blues manager was particularly vocal around refereeing decisions in the matches against Manchester United and Liverpool, but he says he has since calmed down.

“[I switch it off] pretty much the minute after the whistle,” he said. “In terms of my emotions on the sideline, you should have seen me 10 years ago! It was double and triple.

“I was totally sucked into the match, I was sweating all over, attacking the fourth official and the referees all the time. When I was on the bench, no one was safe so I calmed down a lot which is always necessary because it is not always right to express your feelings all the time and right away.”