Liverpool have revealed that talks are ongoing over a tribute to Joe Fagan as part of the current redevelopment work at Anfield, which hints at a possible statue.

March 12, 2021 marks what would have been Fagan’s 100th birthday, serving as the perfect opportunity to honour one of the club’s most influential figures.

Fagan supported both Bill Shankly and Bob Paisley in various roles as part of Liverpool’s legendary Boot Room, before serving as manager for two seasons between 1983 and 1985.

During that time, the Reds won a First Division, European Cup and League Cup treble, landing Fagan the English Manager of the Year award through the League Managers Association.

Retiring in 1985, after almost three decades with the club, Fagan remained a regular at Anfield but stepped back to allow Kenny Dalglish to lead Liverpool into a new era of dominance, before passing away in 2001.

Smokin’ Joe remains the last English manager to win the European Cup, and only the fourth in history following Paisley, Brian Clough and Tony Barton.

It is only right, therefore, that the man who led Liverpool to their fourth European Cup should be honoured fittingly at Anfield.

In the club’s tribute to Fagan on Friday morning, they revealed that “as part of Anfield’s ongoing development in and around the stadium, plans are being discussed for how the club can create a lasting tribute.” 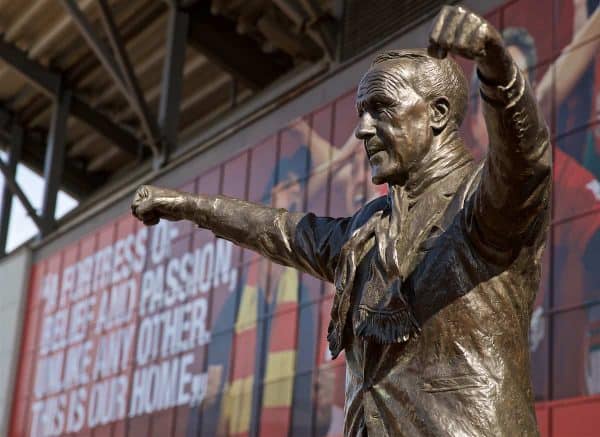 Both Shankly and Paisley already have statues outside Anfield, and it is possible that a similar tribute will be paid to Fagan.

This would suggest that Fagan’s tribute will be outside the Anfield Road End, with development work pencilled in to begin by the end of the year.