Liverpool boss Jurgen Klopp says that he did not want to have to play winger Diogo Jota for 90 minutes on his comeback from injury.

The Portugal international recently spent over two months out after picking up a knee injury in December.

He made his return with a 29-minute stint in the 1-0 defeat to Chelsea, before playing the full 90 minutes in last Sunday’s loss to Fulham.

However, Klopp admitted that did not plan to keep the 24-year-old on for that long against the Cottagers.

Nevertheless, the Liverpool boss opened up on the qualities his side missed in Jota‘s absence. The player scored nine goals in his first 17 games after joining from Wolves.

“You’re right, he was a big miss. A big miss,” the German told reporters (via the Liverpool Echo) at his latest press conference.

“I think the moment when he got injured, he was in a really good moment, which is always then makes the fact that a player is injured even worse.

Klopp added: “So he makes us stronger, which is really good. Now he’s back and he had to play the first game immediately 90 minutes which was definitely not planned.

“It just happened in the game because of other things we had to do. That’s the reason he played only 60 minutes in the second game, but he was fine.

“He felt after the game ok, the next day he was a bit knackered – that’s normal. He should be fine again, that’s really important that we have him back for plenty of reasons.” 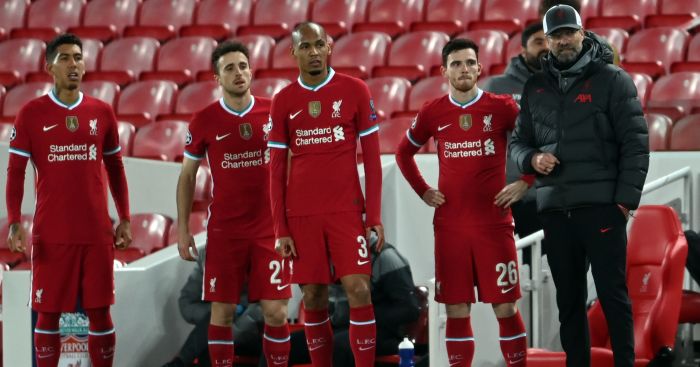 Klopp was speaking ahead of Monday’s clash with Wolves, by which time the manager is hopeful of welcoming Roberto Firmino back into the fold after injury.

“We will see. Bobby was not with us [against RB Leipzig on Wednesday], that means that he couldn’t play.

“But now he has had a few more days and we have the medical meeting after the press conference, sorry.

“So we will give him more information about that. Two more days, hopefully [he will be fit].”

Elsewhere in his pre-match press briefing, Klopp opened up on the future of two Liverpool stars.