Youssef En-Nesyri is making the ‘most of himself’ as well as getting ‘better each day’, says Brazilian centre-back Diego Carlos.

The Morocco international joined the Andalusians on January 2020, for a reported fee of €25 million on a five-year-deal following the exit of Mu’nas Dabbur and Javier Hernandez.

Nonetheless, he made a sluggish start to life at the Estadio Ramon Sanchez Pizjuan – scoring just four goals in 18 LaLiga outings as Los Nervionenses finished the 2019-20 campaign in fourth position.

This season, however, his performances have been nothing short of superb – scoring 13 goals in 25 outings so far – fifth behind Lionel Messi (Barcelona), Luis Suarez (Atletico Madrid), Gerard Moreno (Villarreal) and Karim Benzema (Real Madrid) in the Spanish topflight’s Golden Boot race.

During a LaLiga conference call ahead of Sunday’s El Gran Derbi, the 27-year-old is nothing but enthralled with the African’s performance for Julen Lopetegui’s team.

“En-Nesyri is a very good striker and he really stands out. He is scoring a lot of goals and he is very strong,” Carlos told Goal.

“Also, he is making the most of himself and I think gradually, he is getting better each day.” 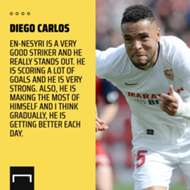 Sevilla were bounced out of the Champions League and have now shifted their attention to the Spanish topflight where they would be aiming for their second diadem ever – albeit, they must negotiate their way past Manuel Pellegrini’s Real Betis.

When asked how important En-Nesyri’s role would be against the Big Green, Carlos states that the responsibility to secure all points at stake does not rest primarily on the former Leganes forward.

“For me, it’s not just about En-Nesyri,  all the players are well prepared and we are a team and a family,” he continued.

“Everyone is prepared because obviously, we need all the players from now until the end of the season.

“We are aware that we are no longer in the Champions League, we did our work and we put in as much effort, but it was not meant to be.

“We are working very hard and our focus is on Real Betis and we will be playing with another expectation and we want to get a positive result.”

After 25 games played so far in the 2020-21 campaign, Sevilla are third in the log with 48 points – 15 points behind leaders Atletico Madrid.