Ohale joined the Spanish outfit for the rest of the season on January 22, and her move came after she parted ways with Serie A women’s side AS Roma.

The switch also marked her return to the Spanish capital since previously enjoying a one-season spell with Real Madrid, where she scored twice in 15 games in 2020.

Although the 29-year-old scored one of her Real Madrid goals in a 4-3 win at Madrid in February 2020, the manager insists he intended to add a ‘top player’ to the team’s defence.

“She’s a player we have been following for a long time,” Fernandez told Goal.

“Whenever we sign a player, we analyze in detail her performance and how she can help us.

“Osinachi [Ohale] from the first day, we knew that she was going to help us a lot and so it is, she has increased the level of the team, she is a top player in the world.” 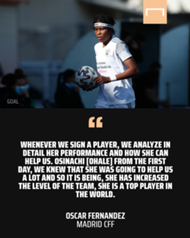 On Sunday, Madrid extended their unbeaten consecutive games to nine, defeating Eibar 3-1 to move to fourth position on the Spanish Primera Iberdrola table, with 42 points, and a game in hand.

Taking positives from his side’s incredible run so far, Fernandez has admitted he wants his team to keep the winning momentum to finish in the top three.

“During the break, we took time to rest and reflected on the things we have done well but also those that need to be improved,” he continued.

“The month of March will be very important for us because it will mark us because we are going to fight the last matches. We are ambitious and we always want more.

“As I said before, the month of March will mark where we can be at the end of the season. We must face every game as a final.

“We know it will be difficult but we are prepared to compete against the best and our players have no limits and have shown it since the beginning of the season.”

With Madrid’s sights set on clinching a Women’s Champions League ticket this season, Fernandez will rely on Ohale’s fantastic form.

In their next fixture, Madrid will see to maintain their highflying form when they visit top-flight newcomers Santa Teresa on Sunday.