After the 26-year-old inspired the Rooks to win at Blackburn Rovers, her manager feels she has the potential to bag more goals

Ini Umotong extended her fine goalscoring form for Lewes against Blackburn Rovers on Sunday and coach Simon Parker has backed her to deliver more goals this season.

The 26-year-old, who joined the Rocks in January on an 18-month contract from Swedish Damallsvenskan outfit Vaxjo, made her fifth appearance against Gemma Donnelly’s side.

In her 85-minute appearance, Umotong scored from the penalty spot in the 13th minute to hand Parker’s team the lead before Rhian Cleverley and Danielle Lane took their turns to seal a 3-0 victory.

Having seen her bag her fourth goal in five league appearances for the Dripping Pan outfit, the manager believes the Nigeria international still has more to offer in the final third.

“She has been fantastic. Ini [Umotong] is just someone who wants to score goals, it is her first thought,” Parker told The Argus.

“So that is something really good for us someone that has that drive and their priority is to score. That has been a huge benefit. She is so powerful and offers a different option for us. 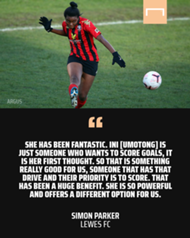 After moving to Lewes, she could not find the back of the net in her two opening games, having made her debut against Sheffield United on January 24.

However, the former Brighton and Hove Albion forward eventully broke her duck in style, with a brace in a 3-2 defeat against London City Lionesses a month ago.

Since then, the 2015 Women’s World Cup participant has not looked back, hitting the back of the net in each of the last three matches.

Having recovered her superb scoring boots, she harbours her own dreams of making an international return to the Nigeria fold after a two-year absence, which she is likely to realise.

The former Portsmouth and Oxford United striker will aim to build on her incredible run of form for her Championship side at home against London Bees in their next fixture on March 28.