Which formations are the best in FIFA 21 and which tactics can get you more wins in FUT Champions and Division Rivals?

Picking the right formation to win games is a tricky task for real-life managers as well as FIFA 21 gamers.

You need to find the right balance between attack and defence, while also playing to your strengths and maximising your players’ potential.

Depending on your play style, some formations will suit you in FIFA 21 and some will be largely ineffective.

However, no matter how you play the game, there are some set-ups in FIFA 21 that are more successful, regardless of whether you like to attack quickly or build up slowly.

Which formations are the best in FIFA 21 and which tactics can get you more wins in FUT Champions and Division Rivals?

Three-at-the-back formations have made a bit of a comeback in recent versions of FIFA after being under-used thanks to their limited numbers in defence.

Having more attacking players usually leads to higher-scoring games, but 3-5-2 offers a bit more balance than some of the other options like 3-4-1-2 or 3-4-3.

The key to defending well when using this formation is not to move the centre-backs out of position, especially when the opponent attacks down the wings.

Instead, track back with your wide midfielders and have good backups on the bench as they are sure to run out of stamina in fast-paced matches.

Hugely popular in FIFA a few years ago, 4-1-2-1-2 has made a bit of a comeback this year thanks to dynamic runs and the new game mechanics. 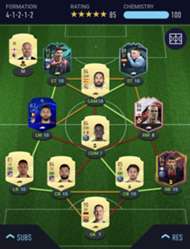 You will always have plenty of options in the box and waiting on the outside of the area, so crossing can work very well, even if the opponent heads the ball away.

The 4-1-2-1-2 (2) variant can also be very effective if you have full-backs with high attacking stats, as they can be set to get forward and provide width.

The regular 4-2-3-1 formation uses three central attacking midfield (CAM) players and thus can get very crowded in the middle of the pitch.

It is a popular formation with pro players and has been used by Tekkz in tournament play this season.

Many people find it one of the most balanced formations as you will have plenty of players back when defending and also be able to counter-attack quickly.

A CAM with high ratings in shooting, passing and dribbling is essential, while you can also pair them with a fast foward for maximum damage.

The default formation in football games for the last 30 years, 4-4-2 remains a popular choice for FIFA users thanks to its balance between defence and attack.

Wide midfielders provide attacking outlets and can be extremely effective to people who like to cross regularly.

Having two strikers allows you to play with a combination of forwards, picking someone who is strong and good in the air as well as a quciker, smaller finisher.

You can also set your full-backs to attack to give even more options out wide, while having two all-round midfielders is crucial to making 4-4-2 work effectively.

Five-at-the-back has become meta this season with many Twitch streamers and pro players deciding to go defensive for FIFA 21.

Many people do not enjoy playing defensively or setting their players to drop back when not in possession, but Weekend League is a results business, so people do whatever they need to do to win.

Fast, attacking wing-backs are key to making any five-at-the-back formation work, but beware: their stamina can be greatly impacted in high-scoring games.

Do not try to press high up the field with this formation as it will tire your players out far too quickly. Instead, look to win the ball back and counter quickly to exploit your opponent.