Erling Haaland and Kylian Mbappe are two of football’s hottest commodities and are consistently linked with Europe’s elite. But which of the two would you prefer at Liverpool if given the choice?

Aged 20 and 22 respectively, the two strikers are highly sought as they continue to light up the German and French leagues.

The Reds, like many other clubs, have seen their name linked with both Haaland and Mbappe, but neither will come without a hefty price-tag.

Both have the ability to spearhead an attack for years to come, a more than worthy investment for any side. But if it came down to it, which player would be pursued over the other?

Their style suits different needs, as Jamie Carragher noted on Sky Sports’ Monday Night Football, having likened Mbappe to Thierry Henry as he “comes wide, he creates things and he scores goals,” while Haaland would be “very similar to Ruud van Nistelrooy – it was just goals, that’s all he thought of.” 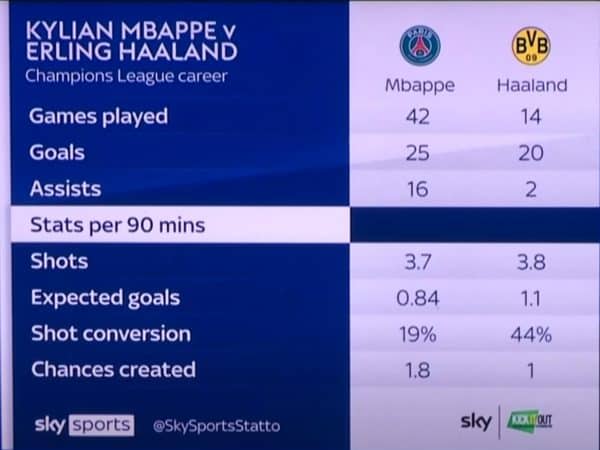 And their statistics in the Champions League helped paint the picture, with Haaland notching 20 goals in 14 games with an unbelievable shot conversion rate of 44 percent, in contrast to Mbappe who created more chances and collected assists in addition to his goals.

Either would elevate any side but when pressed over who Liverpool should choose, Carragher opted for the Norwegian as “he just looks mad, but in a good way like he doesn’t care about anything.”

But what about Reds themselves? This Is Anfield posed the question to fans on Twitter and Facebook and it was a tight one, but Haaland was the chosen one.

While either may very well be out of Liverpool’s reach, the possibility and conversation alone is part and parcel of the game.

And 52.6 percent of the 6,126 who voted on Twitter opted for 20-year-old Haaland due to his ruthlessness in front of goal.

“Just think creating chances is not our problem, it’s finishing them so a natural striker like Haaland would be the better pick,” in the view of @GrahamHehir.

It was the same for @NokkeMannen, who wrote: “Haaland obv. He’s a monster.”

In 2020/21 to date, Haaland has 31 goals in 30 appearances for Borussia Dortmund, which takes his overall tally with the German side to 47 goals and 11 assists in 48 career outings.

There was, of course, room for pessimism over Liverpool’s inability to sign either if Champions League football is no longer on the cards, but where’s the fun in that?

Over on Facebook, 52 percent of the 17,600 votes cast were also in favour of Haaland joining the Reds’ ranks over his French counterpart. 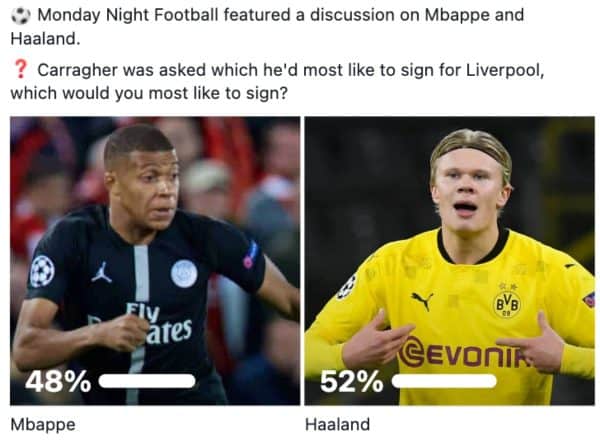 The Frenchman has 26 goals in 34 appearances for Paris Saint-Germain this season and has also tasted success with Monaco and on the World Cup stage.

And for Pj Zaouk, he would be a more than welcome addition to the team and dressing room: “Mbappe is a quality player, knows he’s good but isn’t cocky about it, he would be a great Liverpool signing.”

On the flip side, Reece Craig is with the majority and favours Haaland’s abovementioned strike rate as its a trait he feels this side needs an injection of:

“Haaland. He’s a goal machine. We’ve been crying out for one of those since Suarez and Torres. Would be cheaper too,” he wrote.

Either way you look at it, Haaland or Mbappe would serve as a quality injection into any team in world football and while it may feel as though they could be out of the Reds’ reach, you can never count Liverpool out of the discussion.

Klopp and Co. have shown that they will pay the price for a player in the ‘transformative’ category and they both fit the bill. Never say never.