Kerala Blasters’ new signing has a well-wisher from France…

The Kochi-based club wrapped up a deal to sign Indian defender Sanjeev Stalin and had announced the signing earlier this week. Pavard, who shares the same agent as that of the young full-back, took to his Instagram story to congratulate Stalin. 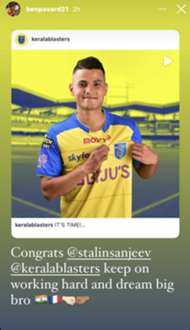 Pavard, who also plays as a full-back for the German giants Bayern, was tested positive for Coronavirus earlier this year and had been in self-isolation until two weeks ago. He returned to action on March 13 as Bayern defeated Werder Bremen 3-1.

Who is Sanjeev Stalin?

20-year-old Stalin is an ambidextrous full-back and is set to be the latest addition to a pool of talented young players at Kerala Blasters ahead of the 2021-22 season of the ISL.

Stalin, who was part of the India U-17 team for the U-17 World Cup and started all three group stage games, started his professional career with the All India Football Federation’s (AIFF) developmental side Indian Arrows from 2017.

After 28 appearances in the I-League over two seasons, the defender signed for Portuguese top-tier club CD Aves in early 2020. He then signed on the dotted line for Sertanense FC, a club that plies their trade in the Campeonato de Portugal, the third-tier football league in the country.

Young full-back Nishu Kumar and defender Sandeep Singh who recently signed a contract extension are also part of the defensive lineup of the club for next season.

Blasters ended the current campaign at the 10th position in the standings with 17 points from 20 matches. They could only win three games this season and recorded the second-worst defence in the league, having conceded 36 goals. Only bottom-placed Odisha have let in more goals than the Kochi-based club.

The Yellow Army parted ways with their head coach Kibu Vicuna after they crashed out of the top-four race and are yet to appoint a new head coach.