Bani Yas moved to the top of the Arabian Gulf League (AGL) table with a narrow 1-0 win over Hatta at the Bani Yas Stadium on matchday 22.

Nicolas Gimenez scored for the hosts in the 28th minute in a match that was closely contested where chances came at a premium.

In the second half, the visitors dominated proceedings but failed to find the equaliser, against a high-flying Bani Yas who recorded their fifth straight win of the league. They are now on 48 points, one ahead of Al Jazira who still have a game in hand.

On the other hand, Sharjah could not return to winning ways as they were held to a 3-3 draw at the Zabeel Stadium.

The hosts were the dominant side in the first half as they raced to a two-goal lead during the half-time break, courtesy of a brace from Joao Figueiredo. However, a rejuvenated Sharjah halved the deficit within four minutes of resumption through Welliton Soares. But, they lost concentration immediately after scoring which allowed Ali Salmin of Al Wasl to restore the two-goal lead.

But the Kings bounced back. Saif Rashid scored in the 76th minute to give them a glimmer of hope. As the match reached its final stages they put more men forward and in the second minute of injury time, they reaped dividends of their sustained pressure with Salem Saleh scoring the equaliser.

After this draw, Sharjah remain in third place with 41 points while Al Wasl have 34 in their kitty. 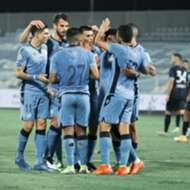 Ittihad Kalba defeated Khorfakkan 2-1 after overturning a one-goal deficit at their own backyard. Khorfakkan broke the deadlock just before halftime when Dodo converted Ramon Lopes’ cross. It seemed that they would walk away with the three points but the hosts had other ideas.

In the 84th minute, Ahmed Amer got the equaliser while Sultan Adil scored the winner just before the 90th minute to script a memorable comeback.

The two sides went toe-to-toe until a defensive mistake from Pedro Pavlov resulted in an own goal to hand the travelling the three points.

After this win they are just one point behind third-placed Sharjah while, Dhafra remain stuck on 20 after suffering their fourth consecutive defeat.