Rahul KP is one of the few positives from a disappointing campaign for Kerala Blasters.

It was in the 17th minute of the 2020-21 Indian Super League (ISL) match between Kerala Blasters and Bengaluru FC that Malayali winger Rahul KP opted to attack the defence from the right channel during a quick counter-attacking procedure.

Gary Hooper’s pass found the winger who then took the ball into the box and unleashed a powerful strike that beat India’s No. 1 Gurpreet Singh Sandhu at his near post. It was a top finish against one of India’s best keepers and was the winger’s first goal of the season for Blasters.

He then came up with another crucial goal – this time an injury-time match-winner against the same opposition – in January that helped Blasters claim three points from nowhere. A similar strike with the same vigour and conviction beat the same keeper once again.

Despite the Yellow Army failing to qualify for the playoffs and ending the season with a disappointing 10th-placed finish, Rahul’s individual display is one of the biggest positives from the campaign. And it was that goal against Gurpreet that turned things around for the winger.

“​I always love to score goals. That goal changed a lot of things,” Rahul told Goal. “Before that, we had lost two points against East Bengal. I was really disappointed. The Bengaluru match was the trigger.

“We also know about the fans – one mistake and you are crucified. I was really stressed and not happy with the performance. And then I got the moment, thank god for that, everything changed after that. “

The 21-year-old ended up playing 17 matches for Blasters, out of which 12 were starts and clocking over 1000 minutes.  His displays helped him get a call from Igor Stimac for an India national team camp but had to be left out due to a knock. While he is not happy with the final output from the season, there have been positive takeaways – like the fact he fended off competition from a player like Nongdamba Naorem who had played under Kibu Vicuna at Mohun Bagan to nail down a first-team role –  these are experiences he could make use of to fuel his professional growth. 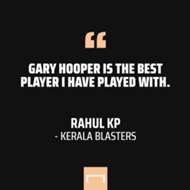 “The more games you play, you improve. Playing 17 matches is not bad. It is a positive thing to play that many games. It has been amazing – not really a rollercoaster ride but still happy to score three goals. I am not satisfied with my individual performance and that of the team. I don’t know what went wrong. I don’t know if it’s due to the coach or the players. Whoever plays should shoulder the responsibility, that’s what I feel.”

“There was competition for sure in the squad. We had a lot of wingers. Nong (Naorem) had played under the coach. I fought for my place, I love it when something is challenging. Without injury, I could have done so much better.”

The seventh season of ISL was played behind closed doors and the players and staff were all locked down under a strict bio-secure bubble in Goa for five months due to the ongoing Coronavirus pandemic. This meant that football became as much a mental challenge as it was physical, especially when teams didn’t find wins easily.

“It is very difficult to deal with the bubble, to be very honest. I thought it is about professionalism, but it is more than that. All the players must have faced this problem – every day it’s the same routine, you have to go to training and come back to the same place. And when the team doesn’t win, it is another thing,” Rahul said.

“All I am saying is that (in an ideal world), if I got to meet my family and friends, things could have been better. I will still play and have the same motivation but if I got to meet my friends and family, it is an extra push,” he opined while asserting that the bio-bubble was required to host the tournament in the middle of such a pandemic.

Rahul scored three goals this season, two of which came against Bengaluru. Both those strikes were assisted by Gary Hooper, who was Blasters’ most hyped foreign signing. After initially struggling to settle into the team, Hooper ended the season with five goals and four assists and was deployed in a slightly deeper role towards the end of the season. The former Celtic forward enjoyed a good partnership with Rahul in the final third and the Malayali winger has high praise for the striker.

“We got so close to the foreign players. We were in the bubble. I enjoyed myself so much with everyone. Hooper was close to me more. Hooper is the best teammate I have ever played with. He makes you understand the game. He is a good game manager, it is so fun. He does half of the job with his vision. He says, Rahul, you have to stay here and do this. I really enjoyed playing with him.”