Thiago has addressed the impact of an empty Anfield on Liverpool’s fortunes this season, admitting the Reds “lack the boost” of fans, particularly late into games.

Thiago is one of a number of signings to arrive on Merseyside during the pandemic, with one of his first interactions with fans coming via social media, with a walk through the empty streets of Liverpool wearing a mask.

It came after a period of self-isolation having tested positive for COVID-19, with that and a long-term knee injury hampering his first months with the club.

Having now settled and established himself as a first-choice starter, Thiago is now getting to grips with life at a struggling club, far removed from the all-powerful Bayern Munich side he left last summer.

One of the biggest influences on Liverpool’s poor form has been the absence of supporters at Anfield, and in an interview with AS, Thiago has explained the difficulty of adjusting to playing in empty stadia.

“It will be beautiful to see a full Anfield but I also want to learn what day-to-day life is like in this new country,” he said, as translated for the Guardian.

“Football loses a lot of its essence without fans in the stands.

“We’re competing in empty stadiums and we’ve had to relearn our craft because when we were children we played in grounds without fans, with parents screaming.

“We knew how to do that but we were used to playing with fans supporting us and shouting against us.

“Now we’ve gotten used to playing without fans, but we miss having them in the stadiums so much; every day we long for them.” 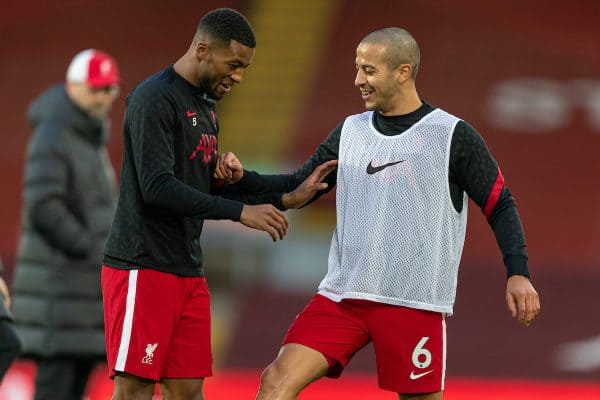 Liverpool have been widely acknowledged as one of the clubs to have been most affected by the restrictions on fans over the past year, but Thiago‘s comments also highlight the issues facing new signings as they acclimatise.

It is a situation that may not be easy to accept from the outside, but one that hinders those coming in as they look to settle into a new environment, lacking much interaction away from the training ground.

Takumi Minamino clearly suffered as a result of this, while it could also explain Kostas Tsimikas‘ particularly slow start to life at Liverpool.

But as Thiago elaborated, the most telling point was that, again, the Reds “lack the boost” of fans – most notably to push them over the finish line.

“You lack the boost fans give you in the final moments of matches, which gives you that physical boost,” he said.

“And in the day to day, to be able to do little in the city with the family.

“You go from home to training and from training to home and you enter a dynamic in which it is just that.

“Football is much more, you have to live the day to day, the approach with the fans.

“I have my son who is a football fan at four years old and not being able to take him to the stadium is frustrating for me and for him.

“When they open everything, it will be much better for everyone.”