A number of Newcastle United stars are said to be incensed by comments attributed to Miguel Almiron calling players’ loyalties and fight into question.

Almiron, 27, spoke to a radio station earlier this week. He was due to play for the South American nation but the games were called off due to Covid. And the former Atlanta United star used his spare time to seemingly stoke the fire of a summer exit. “I would like to play in a team that fights more,” he told Paraguayan radio station ABC Cardinal on Friday.

The forward went on to say he feels “happy” and “comfortable” at St James’ Park but the damage had already been done. Football Insider are reporting that several of his colleagues have taken umbrage to those words.

It may be a frosty reunion when the squad reconvene following the international break.

Almiron might play the ‘lost in translation’ card but his agent, Daniel Campos, has already incensed Magpies chief Steve Bruce.

Back in November, he said: “Miguel’s work rate at Newcastle and Paraguay has been great. If it wasn’t for the pandemic, he would have been elsewhere. Perhaps he would like to play for a team that has a lot of possession. Maybe in June, he’ll make that jump.”

Bruce responded by calling Campos “an amateur who is looking to make a fast buck”.

Almiron seemed clear of controversy after distancing himself from his agent’s words. But now he has seemingly no defence and Bruce may need to calm the waters next week.

Almiron looking for way out?

If Almiron does want to leave Newcastle this summer, he is certainly going about it in the right way. There is no doubting his talent but he has not been consistent enough to make a real difference for the Tynesiders. 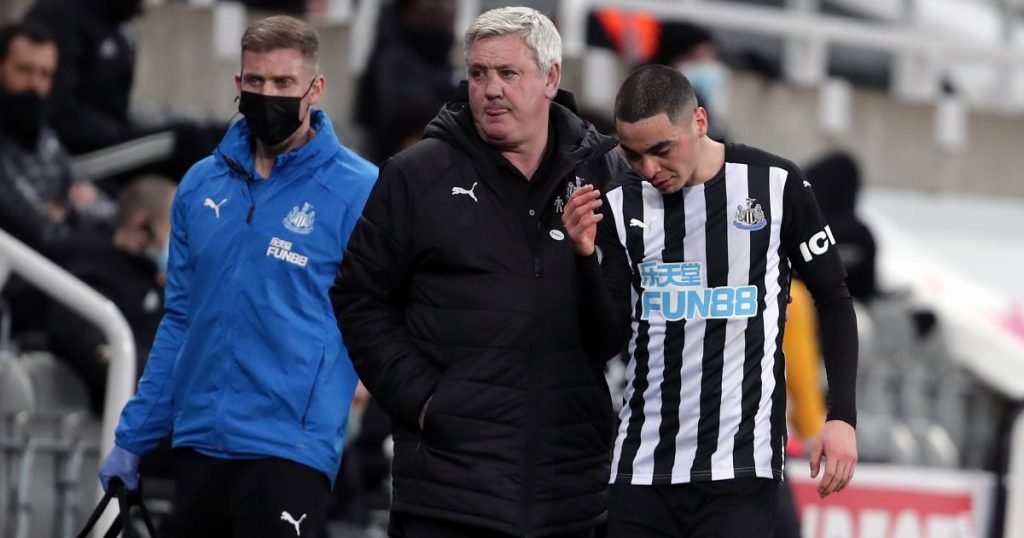 And the report adds that angry players feel he is trying to absolve himself of any blame for recent woeful displays. There is no question that the north-east outfit is a club in crisis.

Talk of dressing room unrest has surfaced, while owner Mike Ashley continues to search for a buyer. With just a two-point advantage over 18th-placed Fulham, they are in real danger of relegation.

Ashley recently backed Bruce after a 3-0 humbling at the hands of Brighton. That opened up cracks in the squad and Almiron seems to have widened them further with his ill-timed interview.