Virgil van Dijk has made his presence known with the Netherlands during their World Cup qualifiers amid an ongoing debate regarding his ability to feature at the Euros this summer.

There are a lot of eyes on Liverpool’s No. 4 as he recovers from a long-term knee injury, with different point of views having been shared at club and country level in recent weeks.

Jurgen Klopp has been eager to stress patience, as a timeframe for his injury cannot be guaranteed as a return from an ACL must be treated with care to avoid further setbacks.

And while Netherlands manager Frank de Boer had initially said he expected Van Dijk to be fit and ready for June, he recently stated that he is “not counting on him right now” with eight weeks left in his recovery.

But the Netherlands captain remains at the heart of the team, as he does with Liverpool, having been part of team meetings for the start of their World Cup qualifying campaign, which started with a defeat to Turkey.

And while the football world speculates over Van Dijk’s return, his international defensive partner in Juventus’ Matthijs de Ligt was eager to follow in the 29-year-old’s footsteps and not add pressure on the situation.

“We had a meeting yesterday, [Van Dijk] was there too,” De Ligt said on Friday, via AS.

“He looked very good, he seemed very fresh and free. Of course, I don’t know how he feels physically, he doesn’t really want to put any pressure on himself either. 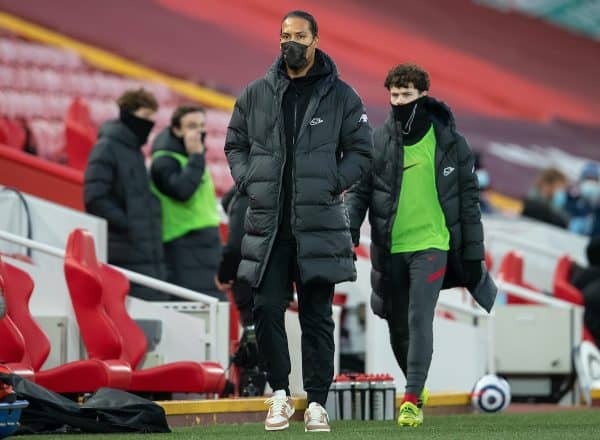 “He has a clear mind and looks at it day by day. He is calm and wants to see where he’s at, at moment the Euros are starting.

“I think it’s important for him to be calm, and to be able to recuperate from his injury without any pressure from us or from the country.

“He will decide if he will be at the Euros. If he’s there, he’s there. If he’s not there, other guys will have to fill his shoes. But yesterday he looked well.”

Much will continue to be said about Van Dijk as the weeks go by and it is a nod to how well his rehabilitation is going that there is a chance he could yet feature again this season.

But any decision will no doubt be made with his medium to long-term future in mind and be taken with caution as Klopp, De Boer and now De Ligt have all stressed.