Bacary Sagna says Arsenal have not punished William Saliba by sending him out on loan this season and has backed the 20-year-old to still make his mark in north London.

Saliba is currently back in France having joined Nice in January,  with the centre-back yet to make a senior appearance for the Gunners following his £27 million ($37m) move from Saint-Etienne in 2019.

Mikel Arteta’s decision not to use him this season has led to many suggesting the Arsenal boss does not rate the Frenchman  but Sagna is sure Saliba can still make a big impact at Emirates Stadium.

What has been said?

Speaking exclusively to Goal about whether he was surprised at how Saliba’s situation has been handled since he joined from Saint-Etienne, Sagna said: “I’m not surprised because he has joined the best league in the world. Being good in France is totally different to proving himself in the Premier League.

“I still have trust in him, I think he is a good player and he can adapt to Arsenal because I’ve seen him play many times.

“He is doing well at Nice and has probably been their best player. At that age you need to be playing. He has big potential and in France people know it.

“Sending him away is not a bad thing, it’s not a punishment. To me it’s clever to send him [on loan] rather than him being on the bench or not even being in the squad.” 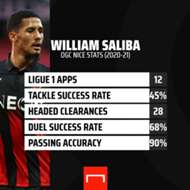 What does Saliba need to do to improve?

Having watched Saliba closely since he made his breakthrough in France ahead of his move to Arsenal, Sagna believes the young defender needs to start shouldering a bit more responsibility on the pitch.

“I’m watching games and maybe he needs to be a bit more aggressive,” said the 38-year-old, who made 284 appearances for Arsenal between 2007 and 2014 before leaving for Manchester City,

“Be a leader, especially in his position. I don’t know if he speaks English. This could be a problem when you come to a new country, but you need to adapt fast, you don’t have time.

“Time is a luxury you don’t have when you come to a club like Arsenal because you have to play straight away.

“To adapt it takes months and Mikel probably saw a problem and thought ‘you need to be more aggressive, you need go out somewhere and play’.

“Then when he comes back, he will have the mentality needed for the Premier League.”