Cristiano Ronaldo did the star turn for Portugal in their final Euro 2020 Group F game against France, scoring two penalties in a 2-2 draw. Not only did his goals see Portugal head into the ROund of 16 but also saw him achieve yet another goalscoring feat.

Ronaldo has become the joint-top scoring men’s international player of all time, with his two goals taking his tally to 109 goals in 176 matches for the national team, putting him at the top of the list of goalscorers on the international stage, level only with Iran’s Ali Daei.

First, let’s take a look at all records Ronaldo has broken already in this tournament. 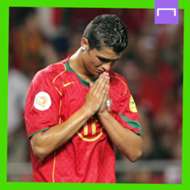 The Juventus forward has represented his country at every Euros since Portugal hosted the tournament in 2004, and he remains the talisman of the reigning champions 17 years later. Ronaldo has now played five Euros – a feat no player has matched so far.

Ronaldo has also scored in every Euro he has taken part in and when he scored a penalty against Hungary in the first group game, he became the only player to score in five different Euros.

3) All-time top scorer at the Euros

Before the start of Euro 2020, Ronaldo was tied with Michel Platini on nine Euro goals as the highest goalscorer in the tournament. He took that record for himself, having scored five goals already in three games. He now has 14 goals to his name and is well clear of Platini.

4) Oldest player to score for Portugal in a major tournament

At 36 years, 130 days, Ronaldo became the oldest player to score for Portugal at a major tournament, breaking the record set by Pepe at World Cup 2018 (35 years, 124 days), when he scored against Hungary.

The Juve star also became the oldest player to score at least two goals in a European Championship match (at 36 years, 139 days) with his brace against France, breaking the record set by himself in Portugal’s Euro 2020 opener against Hungary.

5) Most victories by a player at the Euros

Ronaldo was in a three-way tie for most victories at a European Championship, going into Euro 2020. He was tied on 11 wins with Andres Iniesta and Cesc Fabregas. But with the win over Hungary, Ronaldo has taken the record all by himself.

6) Most goals in World Cup and Euros combined

Cristiano Ronaldo has another piece of history in his grasp after breaking the record of Germany legend Miroslav Klose when it comes to combined goals at World Cups and European Championships.

The Juventus superstar scored twice against France and that took his tally in World Cup and Euros to 21 goals, two clear of Klose who had 19.

What are the other records Ronaldo can break during Euro 2020?

He now has 109 goals in 178 games for Portugal – level with the all-time FIFA international record, held by Iran’s Ali Daei. If Portugal progress deep into the tournament, it is highly probable that Ronaldo will break that record during Euro 2020.

2) Most assists at the Euros

Currently, the record for the most assists made in Euros belongs to Karel Poborsky who is on eight assists. However, Ronaldo is only one away with seven assists. Behind Ronaldo are Raul, David Beckham, Luis Figo, Arjen Robben and Bastian Schweinsteiger who all have registered five each.

In terms of caps, Sergio Ramos has 180 caps for Spain and is the highest-capped European interntional. Ronaldo has 178 caps after the France match and if Portugal progress to the semifinal, he will have broken Ramos’ record.