Inhulets Petrove are still in contention for a place in Europe next season despite their stuttering start to the 2021-2 season, says Stephen Gopey.

After two games in the ongoing campaign, Inhulets have failed to garner any points, which have put manager Serhiy Lavrynenko under pressure.

Despite a brave performance against Shakhtar Donetsk, the Ukrainian top-flight outfit bowed 2-1 in Kyiv last week.

They suffered an embarrassing 5-1 loss at home to Zorya Luhansk on Monday evening – with Vladyslav Kochergin finding the net on three occasions.

Although they languish in the 15th position on the long, the former Wikki Tourist star expects his team to push on and re-establish themselves as contenders for a place in either the Champions League or Europa League.

“We went into the game hoping to record our first win of the season, but after full time the was not the case,” Gopey told Goal.

“Only our coaches can point out where we got things wrong and hopefully, they would be corrected in our next outing.

“It is still too early to write us off because the Ukrainian Premier League is just two weeks old and the two teams, we have played so far will be playing in Europe this season.

“Going by this, you will realise that they are a bigger and stronger team than ours.

“Besides, 80 percent of players in my teams are new signings and once we gel very well, we will be a team no team would want to face.

“That would help us push harder to achieve our dreams of either playing in the Champions League or Europa League next season.” 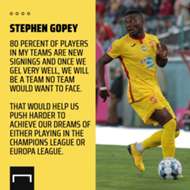 Due to his impressive displays in the Nigeria Professional Football League, the youngster was signed by the Ukrainian elite division side on a three-year contract.

He opened up on what he intends to achieve with the Kirovohrad Oblast-based outfit at the end of the season.

“This is my first season in Europe and hopefully if I am able to get at least 10 goals in all competitions, then I will be the happiest man on earth,” he continued.

“The Ukrainian league is a tough one but if I keep working hard, that is a realistic goal to achieve.”

Inhulets would be hoping to return to winning ways when they face Desna Chernihiv in their next league outing on August 9.