Thiago will play no part in Liverpool’s pre-season double-header with Bologna on Thursday as his preparations for the new season continue to be hindered by a lingering injury.

The Spaniard arrived at the Reds’ pre-season training camp last week but was a notable absentee in training until Tuesday, having taken part in the morning session in Evian.

However, a three-week break following his Euro exploits with Spain has failed to see him overcome a “slight issue,” putting the start of his campaign in jeopardy.

The No. 6 featured for only 126 mins as his country made it to the semi-finals of the summer tournament but he is going to be forced to wait to accumulate any more for Liverpool.

Jurgen Klopp has confirmed that Thiago will play no part in either of the two 60-minute clashes against Bologna and the hope is that he can return to full training next week.

“Thiago came here with a slight issue. He has three weeks off and the slight issue is still [there], which he was feeling,” Klopp told LiverpoolFC.com. 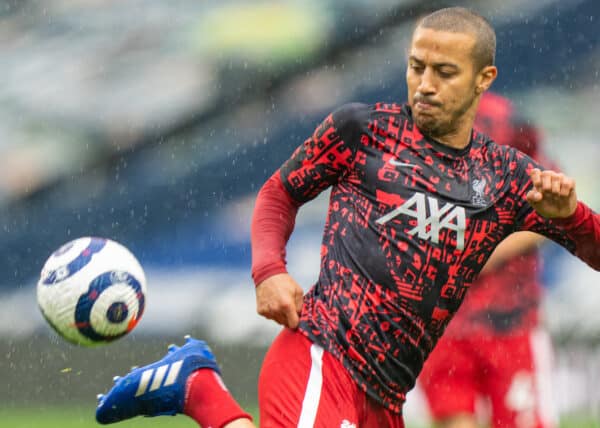 “We don’t take any risks. He’s part of parts of training and in these little things he looks great, but it’s more the longer distances where he struggles slightly.

“We have to make sure that will be sorted and we are on it. I think he will be in next week, [at the] latest, in full training.”

It suggests that either of the Anfield friendlies against Athletic Club and Osasuna, which will host the biggest crowd since March 2020, will also be too soon for the 30-year-old.

With just five days between the last friendly and the season opener at Norwich, Klopp will need to look to Naby Keita, James Milner and Curtis Jones to lineup alongside Fabinho in midfield with Jordan Henderson a latecomer to training.