The football great is sad to see the Argentina international leave Camp Nou, but he claims that would not rob the Spanish top flight of its shine

Former Real Madrid midfielder Mutiu Adepoju is philosophical over Lionel Messi’s Barcelona exit, claiming that his departure from Camp Nou would be no catastrophe for La Liga.

A statement from the Blaugrana confirmed that the Argentina international would leave the Catalan outfit after negotiations over a new deal fell apart on Thursday.

The 34-year-old was set to accept a deal that would see his wage slashed by 50 per cent as his previous contract expired this summer.

Nonetheless, the 26-time Spanish kings’ financial status made it a near-impossible mission for them to register him for the 2021-22 campaign without reducing their wage bill significantly.

This news of his departure has become a major talking point in football circles as some have suggested that it will have an adverse effect on the Spanish elite division, a claim the former Nigeria international and La Liga ambassador disagrees with.

“Just like every other big player that has left La Liga, Messi’s departure would really be felt. However, that will never be the end of the league,” Adepoju told Goal.

“As you know, several great players have come and gone, yet La Liga remains and the quality was never affected.

“When [Cristiano] Ronaldo left, everybody missed him but the Spanish top flight continued because there are several big stars in the league.” 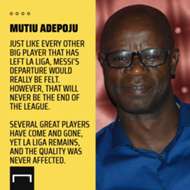 “Looking at this objectively, you will see that there has been a huge economic loss because of the Covid-19 pandemic. Probably that is the angle where Barcelona are coming from.

“He is the club’s highest-paid player and meeting his financial demands might be very difficult during this period. Messi has achieved a lot with the club and if everything was okay, they would have wanted him to stay.

“It is just unfortunate, and his departure is a big loss to Barcelona.”

Adepoju is also upbeat that Ronald Koeman’s team will unearth another football great.

“There are so many young players coming up and I believe that another great player would be thrown into the limelight soon,” he added.

“Barcelona are famous for their ability to discover and develop talents, so, getting a replacement [for Messi] may not be a problem.

“Whether we like it or not, Messi would retire one day and other players would definitely step in.”