PSG, with Lionel Messi and Neymar back at their disposal, are set to open their Champions League group stage campaign for 2021-22 on Wednesday away at Club Brugge, with French superstar Kylian Mbappe already breaking the net in the absence of the South American duo.

It will without doubt be an uphill task for the Belgian side against the French giants, though they enter the tie on the back of a 3-0 win over Oostende in the Belgian Pro League.

Here’s how to watch Club Brugge vs Paris Saint-Germain in the 2021-22 Champions League from India.

What time does Club Brugge vs Paris Saint-Germain start?

Matches will also be available to stream via SonyLIV app and website, besides JioTV mobile app, allowing supporters to watch multiple games simultaneously and catch the replay of matches. 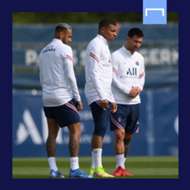 Philippe Clement will hope to field his strongest XI but may have to do without the injured Colombian winger Jose Izquierdo.

Most notably, both Messi and Neymar are fit and available for PSG and it could be the first time for MNM in action.