Thomas Frank says everyone at Brentford is looking forward to Sunday’s trip to Liverpool and confirmed Sergi Canos is set to be fit to face his former club.

Wing-back Canos made his return from a hamstring injury during Tuesday’s 4-1 loss at Southampton but was forced off to raise doubts about his chances of making an overdue appearance at Anfield.

The Spaniard moved to Merseyside as a teenager in 2013 but only played once for the Reds, away to West Brom at the end of the 2015/16 campaign, before he departed Liverpool and carved out a career in England with the Bees via a short stint with Norwich.

“Yes, Sergi should be available. He trained today so that was positive,” Frank confirmed on Friday.

“I think unless someone maybe cut his leg off, he would do everything to be ready for this game, but to be fair all the players want to be available for a game like this.

“It is the first time we are going to Anfield and we all know that is one of most iconic football stadiums in the world. 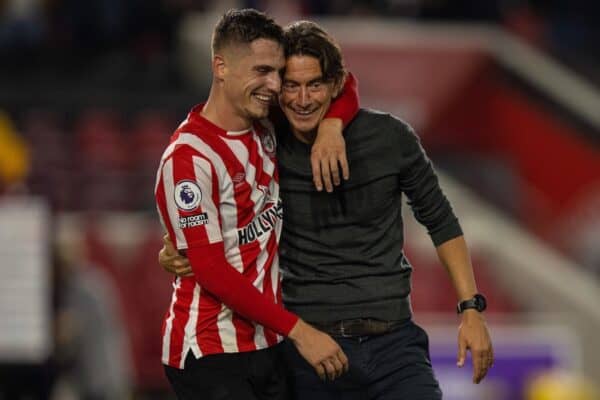 “We are all looking forward to that and we want to go there and express ourselves and attack but we want it to be a fun and good experience at both two o’clock and also at four o’clock.

“It is not that fun if we go there and get beat 4-0. It is only a fantastic experience if you go there, perform and get a good result, so that is what we aim for.”