Fabinho was a standout figure in Liverpool’s 3-0 win over Brentford, as individuals improved greatly across the board after the draw with Arsenal.

Jurgen Klopp‘s side weren’t always at their sparkling best at Anfield on Sunday, but they got better as the minutes ticked by.

Fabinho‘s header gave Liverpool the lead shortly before half-time and Alex Oxlade-Chamberlain doubled the advantage in front of the Kop.

Substitute Takumi Minamino rounded off the win with a close-range finish, on a solid day for the Reds.

Here we compare our player ratings with those from the Liverpool Echo, BBC Sport, FotMob and the TIA readers. 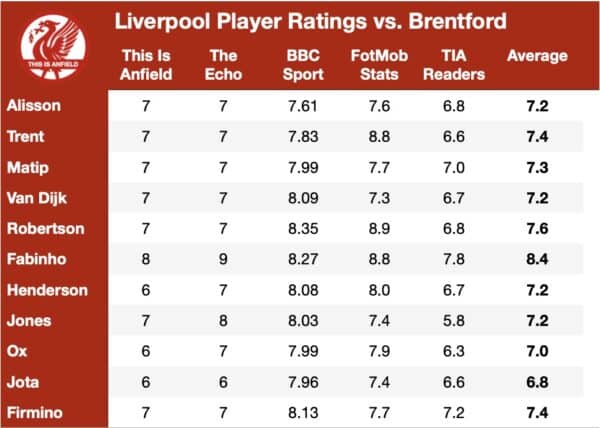 There was no question over who Liverpool’s star performer was, with Fabinho (8.4) comfortably out in front.

The Brazilian not only put Liverpool 1-0 up with a well-taken header, but he was a dominant figure in the middle of the park.

TIA hailed a “third goal in the last few games” for Fabinho, also saying he was “consistent and impressive in almost everything.”

The Echo‘s Ian Doyle was similarly enthused with the midfielder’s performance, describing it as “excellent” and praising him for “winning a succession of second balls.”

In second place was Andy Robertson (7.6) after a strong outing in which he laid on the assist for Oxlade-Chamberlain’s header.

The left-back played three key passes, according to FotMob, as well as winning six out of eight duels.

TIA felt it was a “step back toward decent form after a recent absence” for Alexander-Arnold, while Doyle said Firmino “increased in threat second half.”

Bottom in the ratings was Diogo Jota (6.8), who had a quiet afternoon and wasted one glorious one-on-one opportunity.