The Anfield Road End expansion is visibly starting to look the part with the central core of the stand firmly in place.

Each and every matchday fans can see either a subtle or major change to Anfield’s landscape with work ongoing for the new stand that will add a further 7,000 seats to the ground’s capacity.

And while the completion date for the 2023/24 season cannot come soon enough, present day continues to see notable progress made on what is an impressive blueprint.

With foundation works now complete, steelwork has been put in place to bridge over the old Anfield Road itself, with reinforced concrete providing plenty of stability.

The central core of the stand has been framed, which will eventually sit under the new upper tier, and a number of concrete wall panels have been put in place as it continues to be all hands on deck throughout the winter months.

In due course, you will see the structure join on to the existing Anfield Road End in a process akin to that undertaken for the Main Stand development, ensuring little disruption to the stadium’s normal activity.

From our exclusive footage (above), you can see the changes on-site and the sheer size of what will be the new and improved Anfield Road End. 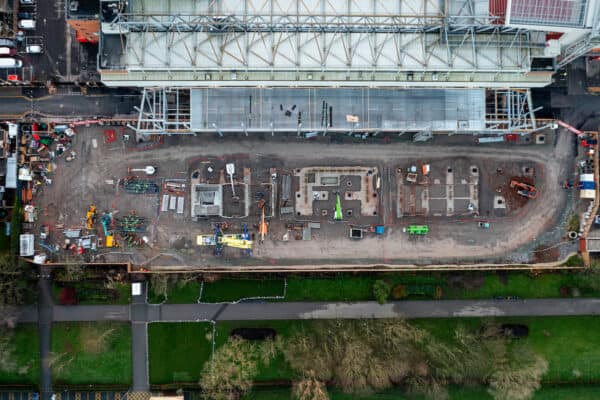 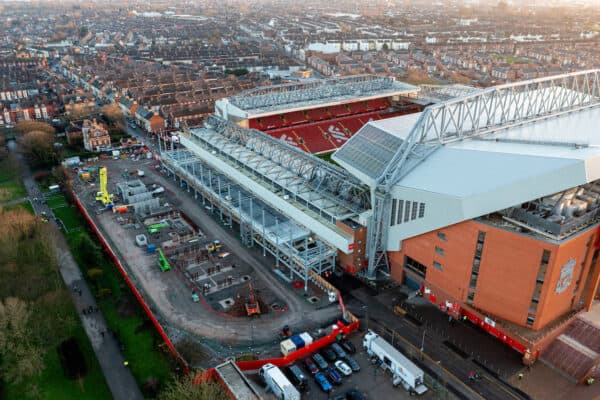 In total, 4,800 tonnes of structural steelwork will form the framework with 7,000 cubic meters of reinforced concrete then added to the mix to make up what will be another imposing stand at Anfield.

The Buckingham Group are the contractors for the project and are scheduled to have the stand, which is to cost £80 million, ready by summer 2023.