Liverpool are in the capital and have only one thing on their mind, and Jurgen Klopp has made two changes to his side from the weekend in the bid to make it to the cup final.

The Reds found the creative spark they were lacking in the first leg when Brentford came to town over the weekend, and the same is needed tonight.

After the stalemate in the first leg, the tie is finely poised and could yet still be destined for extra time and even a penalty shootout.

And chosen to help steer Liverpool to victory, starting at the back, is Caoimhin Kelleher – returning after sitting out in the first leg.

In midfield, Fabinho starts his sixth game in a row and will sit between captain Jordan Henderson and Curtis Jones.

And Diogo Jota and Roberto Firmino are, excitingly, joined by 17-year-old Kaide Gordon to lead the line.

On the bench, Klopp has the likes of Takumi Minamino, James Milner and Tyler Morton to turn to, with five substitutions available tonight. 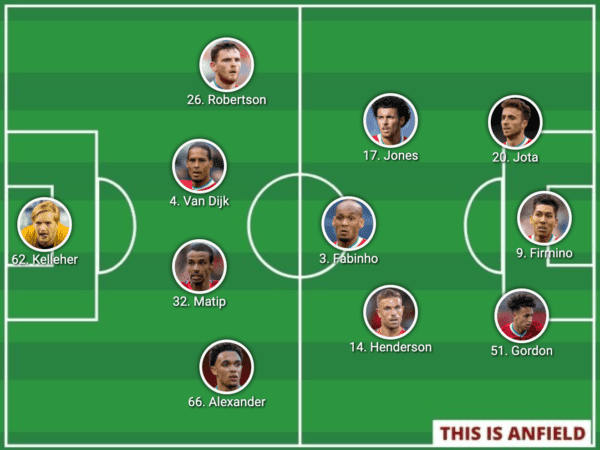 September 27, 20223 min read
Two players who have been away on international duty have offered Liverpool a timely boost…

September 27, 20223 min read
There were mixed feelings from the German camp after Monday’s dramatic 3-3 draw against England…

Messi loving life at PSG with Neymar: ´I´d liked to have enjoyed him more in Barcelona´

September 26, 20222 min read
Lionel Messi wishes he could have played alongside Neymar for longer at Barcelona but is…

Vlahovic to Arsenal links wide of the mark

September 26, 20222 min read
Inter midfielder Marcelo Brozovic is facing a spell on the sidelines after suffering a thigh…

September 26, 20223 min read
Two players who have been away on international duty have offered Liverpool a timely boost…

“A wonderful person… best in the world” – How Liverpool’s No. 1 enraptured ex-Red

September 26, 20222 min read
Alisson has amassed quite the fanbase whilst at Anfield and one former Liverpool ‘keeper sits…

September 26, 20224 min read
With less than two months to go until Liverpool’s season is paused for the World…