Harvey Elliott has credited a behind-the-scenes figure at Liverpool as the “most important” influence on his comeback, having scored after four months out.

Elliott made a triumphant return to the side as he came off the bench and scored his first goal for the club in Sunday’s 3-1 win over Cardiff in the FA Cup.

It came after a long spell on the sidelines, having suffered a fracture-dislocation in his ankle in the 3-0 win at Leeds back in September, and his celebrations said it all.

A big moment for the player, along with his family, his manager and his team-mates, Elliott will now be looking to push on and reclaim a starting spot in Jurgen Klopp‘s side.

Speaking to ITV after the game, Elliott was asked about the individuals he was thankful for during his time out, and praised one physio in particular.

“The list goes on, to be honest. But one man, most importantly, was Joe Lewis at Liverpool,” the teenager said. 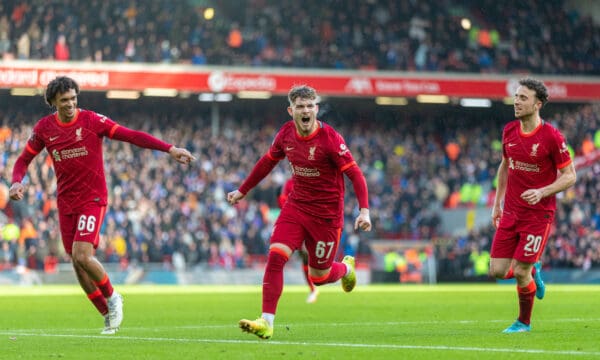 “One of the physios, he took me in, early hours of the morning, and didn’t finish until late at night. He got me back strong again.

“Big shoutout to all my family and friends as well, especially my mum and dad, they obviously helped me and supported me throughout.

“Just a massive thank you to everyone at LFC, the fans as well with the support and love when I did it. 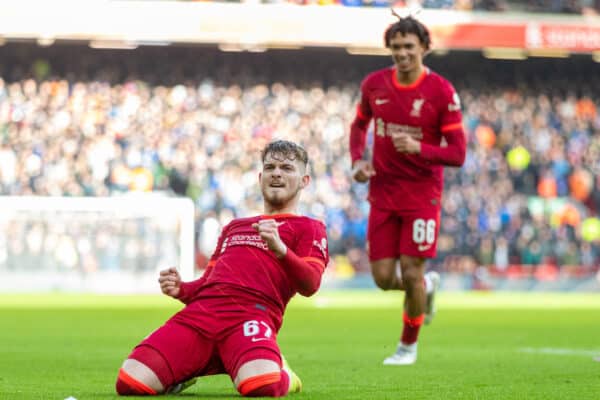 There was a confidence and swagger to Elliott’s play that belied his lack of minutes over the past four months, with there being no reluctance to get stuck in and perform.

He joined Diogo Jota on the scoresheet at Anfield, and alongside him for the post-match interview, the No. 20 hailed his young team-mate’s commitment while out.

“All the hard work he puts in in the gym to be fit, to be able to be here today to play and to score as well. Congratulations.”

Elliott added: “It’s still hard to put into words at the moment.

“This is what I’m in the team to do, score and assist. Thankfully, it’s come today in front of the fans, after a long time.

“It’s my job at the end of the day, I’ve just got to keep doing it. It’s a moment that myself and my family will remember.”