James Milner has echoed the thoughts of many when it comes to VAR and its assessment of tackles, with slow-mo replays doing little to help a players’ cause.

There is hardly a game that goes by that does not see a decision from a referee or VAR dominate headlines, the opposite of what many had hoped would happen after the introduction of video technology.

And having debuted in 2002, Milner has seen the game transform from the best seat in the house over the past two decades but is eager not to see fair physicality fade out of the game.

The lack of consistency is particularly frustrating in adjudging challenges with slowing footage down adding to the discourse, but Milner acknowledges that the referees have it tough.

“You can get sent off a lot easier now, but it’s important to get the balance right with tackling,” Milner told the Liverpool FC Magazine.

“Nobody wants to see any injuries and there’s a difference between a hard, fair tackle and a tackle that could injure a player, but it’s tough for the referees sometimes. 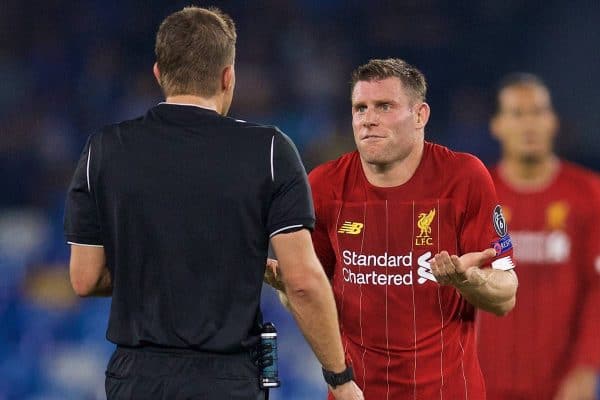 “Obviously, VAR should help referees get those decisions right, but when things happen at full match speed it is sometimes tough.

“Again though, when they go to VAR they’ve got to look at tackles at full speed because you slow any tackle down and make it look like a bad tackle on a freeze-frame, so it’s a fine line.

“I think it’s important that we keep that physical side in the sport because that is what people have loved. The days have gone of ‘getting the first tackle free’.

“I started as a winger and I always knew in the first tackle I was going to get nailed by the full-back from behind and they’d get away with it. That was part and parcel of the game.

“So it’s important to get the balance right as I think people like the physical side, especially in England. They want to see fast, free-flowing games – not stop-start all the time.”