After 14 games, Liverpool have banked 22 points and sit in sixth place – but how does that record compare to the previous 12 seasons?

A lot has been made of the Reds’ start to the 2022/23 season after four league defeats in just 14 games, double the amount recorded across the entire 38 fixtures last season.

The Reds’ issues have been put firmly under the microscope, with injuries, transfers – or lack thereof – fatigue, formations and desire, among others, all having their time in the spotlight.

And Liverpool’s disjointed start leaves them 15 points off leaders Arsenal and seven adrift of a top-four spot, but Jurgen Klopp‘s side have played a game less than fourth-placed Tottenham.

As for how the start to the Premier League season compares to previous campaigns, only in three other seasons have Liverpool notched less than 22 points after 14 games since 2010/11. 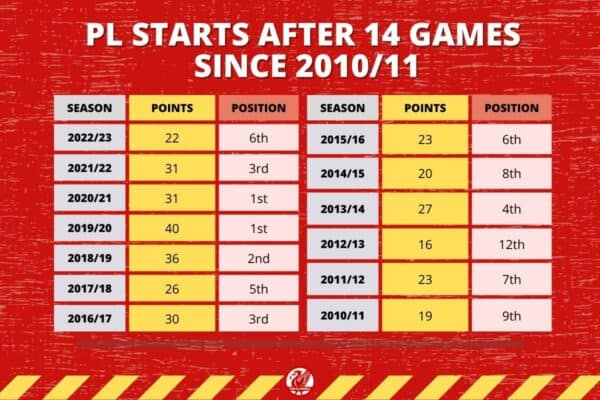 Liverpool have plenty of work to do when their campaign resumes at Aston Villa on Boxing Day but their training camp in Dubai will afford Klopp plenty of time to lay the foundations.

“We know we can do better, we have to do better, and we will do better,” Klopp said after the last game before the World Cup break.

“We have three weeks with a big group, a proper pre-season for the long rest of the season which starts with lots of games, but that’s fine.”

Liverpool and the Dubai Super Cup – Key dates for your diary